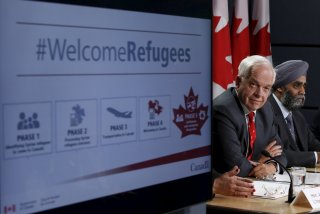 In many ways, Canada seems perfectly positioned to take advantage of climate change. The country sits on a vast wealth of natural resources with an abundant supply of freshwater, oil, and natural gas. Its political system is, for the moment, relatively stable. And as the planet warms, Canada’s traditionally unfarmable northern regions could turn into the world’s breadbasket. But for all its advantages, Canada is desperately lacking in one vital resource: people.

Indeed, despite being the world’s second-largest country, Canada has a relatively modest 38 million citizens, a mere one-ninth of the United States’ population. More importantly, the national fertility rate has long been in steady decline, with the number of Canadian births reaching a fifteen-year low in 2020. This puts the country in a precarious position: while most populations need a total fertility level of a little over two children per woman to survive, Canada sits at just 1.47, representing one of the lowest birth rates in the West. Were this trend to continue, the country’s population could start shrinking within the next two decades.

There’s good reason to see this as a serious national security concern. Most crucially, Canada’s dropping fertility rates will bring about a massive shift in the country’s age demographics, with the percentage of Canadians aged sixty-five and older projected to increase from 17.2 in 2018 to over 20 in 2030. The resulting impact on the workforce will be dramatic. Today, the country’s ratio of workers to pensioners is three to one. Over the next fifteen years, that number will fall to two. And indeed, while the cultural implications of this sort of demographic change can be complicated, the economics are rather simple: as Canada ages, its productivity will decline, labor costs will skyrocket, and the country’s robust social programs will crumble under the weight of its retiring population.

Degrowth, then, would represent a catastrophic opportunity loss for a country primed to benefit from global warming. In one famous study, Stanford professor Marshall Burke estimated that if Canada were to take complete advantage of its newfound agricultural opportunities, it could see a fivefold increase in its gross domestic product over the next several decades. But that’s a huge “if.” Canada will need a massive amount of labor to exploit its 4.2 million square kilometers of new agricultural frontier, and as it stands, its population is not growing nearly fast enough to meet the region’s growing demand.

So now, with the writing on the wall for its future growth, Canada has started looking abroad. The result has been a dramatic increase in Canada’s immigration targets: just last year, Immigration Minister Marco Mendicino announced that the country would be aiming to add an additional 500,000 permanent residents in 2021, an increase of more than 50,000 from 2020.

And yet many still think this doesn’t go far enough. One particularly influential group of business leaders and academics, known as the Century Initiative, wants Canada to nearly triple its population by 2100. “Growing our population to 100 million by 2100 would reduce the burden on government revenues to fund health care, old age security, and other services,” the Initiative's site reads. The group states that “100 million is not just a number. It’s a vision for the Canada we want to build for future generations.”

Such an approach would have profound socio-cultural implications. To be sure, a 100 million person Canada would look markedly different from how it looks today, raising the question of whether or not Canadians are ready for such a sudden shake-up of the national demographic.

But it’s a risk that Canada seems prepared to take, and they’re not alone. To the east, Russia and the Scandinavian countries—both thought to be potential “climate winners”—have cited underpopulation and declining birth rates as major obstacles to their national growth. Russia, in particular—never known for its subtlety—has discussed flying in hundreds of thousands of Indian workers to its now-arable Far East region. Many in Sweden, too, have pushed for increased immigration rates as the population ages.

Each approach will surely have unique strengths and weaknesses that will lead to different results depending on each country’s specific circumstances. For a nation like Russia, for example, the presence of China to the south means that it must be careful when deciding which foreign nationals (and how many) it wants to allow in. Canada, on the other hand, has the advantage of an immigration system that prioritizes immigrants with perceived “value,” allowing the country to admit those who best fit its evolving socio-economic needs.

Immigration, then, will have a key role to play in the West as declining birth rates and climate change transform the world order. Indeed, with the right policies, countries like Canada and Russia could see their prospects soar. But with the wrong policies, their economies could be destined to collapse.

Thomas Hochman (@thomashochman) is a Fellow at Citizens’ Climate Lobby. His work has been featured in The National Interest, The Washington Examiner, and a number of other outlets.