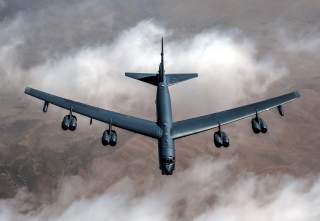 Unusually heavy rainfall in mid-March 2019 killed three people and swelled the Missouri River in the United States' midwest region. The rising river water flooded one of the U.S. Air Force's most important installations.

The flooding at Offutt Air Force Base near Omaha, Nebraska inundated a third of the base and forced the resident 55th Wing to relocate some of its strategic reconnaissance aircraft and other planes. "It is extremely clear that we face a grand challenge," wing commander Col. Michael Manion wrote on March 17, 2019.

"The base was able to move nine of its aircraft away from the base—eight RC-135 Rivet Joints and one E-4B Nightwatch," Air Force magazine explained, citing Offutt spokesperson Ryan Hansen. "Four aircraft remained—three -135s and one E-4B. Those aircraft were moved to a part of the flight line on higher ground and are safe," Air Force reported.

The buildings next to the flightline were hardest hit, however. The majority of the base’s aircraft hangars, maintenance facilities, the 55th Wing headquarters building,  97th Intelligence Squadron bui­lding, the 343rd Reconnaissance Squadron building and the 55th Security Forces building were all flooded.

Overall, about 30 buildings were damaged. The 55th Wing flew in a portable dam to try to protect the building holding its high-tech flight simulators, but it could not be deployed in time.

Offutt also is home to facilities belonging to U.S. Strategic Command. Those, too, closed as a result of flooding. "This says it all," Manion commented while sharing overhead imagery showing the river spreading across an area an order of magnitude greater than normal.

Human-driven climate change is making weather more volatile and more extreme and in the future could result in more frequent and more severe damage to military installations, among other risks, the Pentagon explained in a January 2019 report.

"The effects of a changing climate are a national-security issue with potential impacts to Department of Defense missions, operational plans and installations," the report states.

Besides damaging installations, a warming world also threatens agriculture, water supplies and human health, with potential knock-on effects on political and economic stability, according to a separate, government-wide climate report from November 2018.

Climate change "is transforming where and how we live and presents growing challenges to human health and quality of life, the economy and the natural systems that support us," the November report warns.

Warming in the Arctic region, in particular, could have major military implications, the Congressional Research Service explained in a March 2019 report.

"Record low extents of Arctic sea ice over the past decade have focused scientific and policy attention on links to global climate change and projected ice-free seasons in the Arctic within decades," the CRS report states. "These changes have potential consequences for weather in the United States, access to mineral and biological resources in the Arctic, the economies and cultures of peoples in the region and national security."

"Some of the Arctic coastal states, particularly Russia, have announced an intention or taken actions to enhance their military presences in the high north," the CRS report notes. "U.S. military forces, particularly the Navy and Coast Guard, have begun to pay more attention to the region in their planning and operations."

But the science is clear. And so is the course of action that experts across government recommend U.S. leaders pursue. The United States must act aggressively to limit carbon emissions in order "to avoid substantial damages to the U.S. economy, environment and human health and well-being over the coming decades," the November 2018 report advises.