Could the Next Big War Take Place in the Arctic? 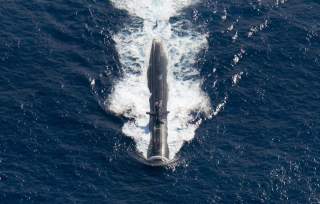 The Arctic region is getting warmer. Ice is getting thinner. Sea passages through the region are opening wider.

The changes, driven by centuries of carbon-intensive human industry, could have military implications, the Congressional Research Service explained in a March 2019 report.

"Record low extents of Arctic sea ice over the past decade have focused scientific and policy attention on links to global climate change and projected ice-free seasons in the Arctic within decades," the report stated. "These changes have potential consequences for weather in the United States, access to mineral and biological resources in the Arctic, the economies and cultures of peoples in the region and national security."

Eight countries have sovereign territory within the Arctic Circle. The United States, Canada, Russia, Iceland, Norway, Sweden, Finland and Denmark by virtue of its territory Greenland.

China considers itself a "near-Arctic" state, according to CRS.

"Some of the Arctic coastal states, particularly Russia, have announced an intention or taken actions to enhance their military presences in the high north," CRS noted. "U.S. military forces, particularly the Navy and Coast Guard, have begun to pay more attention to the region in their planning and operations."

Competition for resources drives the militarization of the region. "Motivated in part by a desire to exercise sovereign control over the Arctic region’s increasingly accessible oil and gas reserves the four Arctic coastal states other than the United States—Canada, Russia, Norway and Denmark (of which Greenland is a territory)—have made or are in the process of preparing submissions to the [United Nations'] Commission on the Limits of the Continental Shelf regarding the outer limits of their extended continental shelves."

Russia has been attempting to chart the Arctic Ocean’s enormous underwater Lomonosov Ridge in an attempt to show that it is an extension of Russia’s continental margin. The ridge spans a considerable distance across the Arctic Ocean. A 2001 submission by Russia was rejected as insufficiently documented. Canada views a portion of the ridge as part of its own continental shelf.

In August 2007, a Russian submersible on a research expedition deposited an encased Russian Federation flag on the seabed of the presumed site of the North Pole. The action captured worldwide attention, but analysts note that it did not constitute an official claim to the Arctic seabed or the waters above it, that it has no legal effect, and that it therefore was a purely symbolic act.

In all, there are four territorial dispute around the North Pole.

"Scientists have forecast that in coming decades, global warming will reduce the ice pack in Canada’s northern archipelago sufficiently to permit ships to use the trans-Arctic shipping route known as the Northwest Passage during the summer months," according to CRS. "The prospect of such traffic raises a major jurisdictional question. Ottawa maintains that such a passage would be an inland waterway, and would therefore be sovereign Canadian territory subject to Ottawa’s surveillance, regulation and control. The United States, the European Union and others assert that the passage would constitute an international strait between two high seas."

Meanwhile, the United States and Canada are negotiating over a binational boundary in the Beaufort Sea. The United States and Russia in 1990 signed an agreement over a disputed area of the Bering Sea. The U.S. Senate in 1991 ratified the pact, but the Russian Duma has yet to approve the accord.

Finally, Denmark and Canada both claim Hans Island, a tiny, barren piece of rock between Greenland and Canada’s Ellesmere Island. "Some analysts believe the two countries are vying for control over a future sea lane that might be created if the Arctic ice were to melt sufficiently to create a Northwest Passage," CRS explained.

Arctic states' investment in icebreakers signals their intention to compete for Arctic resources. While a warming North Pole soon could result in ice-free summers, ice is projected to return in the winters.

The Russian government operates no fewer than 22 icebreakers, including several very large, nuclear-powered vessels. China, too, has an Arctic-capable icebreaker, Xue Long, and is completing construction of its a second ship.

The United States lags behind. In early 2019 the U.S. Coast Guard, which has been responsible for the U.S. government's polar icebreaking mission since 1965, operated just one large icebreaker, the 399-feet-long Polar Star. The service also operated Healy, a 420-feet-long medium icebreaker.

Polar Star in particular is unreliable and prone to mechanical breakdowns.

After years of delays, in January 2019 Congress finally appropriated $655 million for one new icebreaker and an additional $20 million for long-lead components for a second vessel.

The ships can’t enter service soon enough. Besides changing and destabilizing weather patterns all over the planet, a warming Arctic could spur intensive competition between increasingly heavily-armed regional states.

War is not inevitable, of course. But U.S. policymakers should be careful, CRS advised. "Although there is significant international cooperation on Arctic issues, the Arctic is increasingly being viewed by some observers as a potential emerging security issue."