43 Years in the Making: The U.S. Coast Guard Finally Gets New Icebreakers 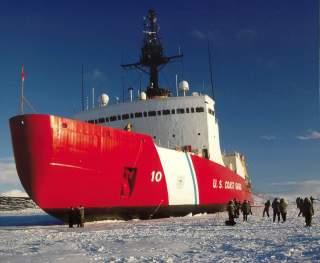 Forty-three years after commissioning its only current heavy icebreaker, the U.S. Coast Guard finally is getting two new icebreakers.

The January 2019 spending bill that Congress negotiated to end the 35-day partial shutdown of the federal government includes $655 million for the first icebreaker and an additional $20 million for long-lead components for a second icebreaker.

Politically-motivated maneuvers by Congress and the Trump administration repeatedly threatened the icebreaker acquisition.

In early 2019 the Coast Guard, which has been responsible for the U.S. government's polar icebreaking mission since 1965, operated just one large icebreaker, the 399-feet-long Polar Star.

Despite a three-year refit ending in 2012, Polar Star is prone to breakdowns. In early 2018 while on a mission to McMurdo Station, the main base for the U.S. government's Antarctic research program, Polar Star suffered serious electrical problems.

"We had less ice this year than last year," U.S. Coast Guard captain Michael Davanzo, said in an official press release. But "we had several engineering challenges to overcome to get to the point where we could position ourselves to moor in McMurdo."

To achieve that inventory, the act states, the Coast Guard should award a contract for the first new icebreaker no later than 2019, deliver the first vessel no later than 2023 and start construction on the second through sixth new ships at a rate of one vessel per year in 2022 through 2026.

The Coast Guard should accept delivery of the second through sixth new icebreakers at a rate of one vessel per year in 2025 through 2029.

But no sooner was the ink dry on the defense authorization act than politicians intervened to potentially halt the icebreaker acquisition before it could even begin.

Under pressure from supporters of Pres. Donald Trump in the U.S. House of Representatives, in August 2018 DHS reportedly considered eliminating the $750-million budget line for the lead icebreaker and shifting it into an account for Trump's controversial, multi-billion-dollar plan to build a wall along the U.S.-Mexican border.

As recently as late 2018 it was unclear whether DHS would fund an icebreaker in 2019. The partial shutdown of the federal government that began in mid-December 2018 also jeopardized the icebreaker program.

DHS and the Coast Guard were two of the agencies that mostly halted operations. Trump had demanded that Congress, including a new Democratic House majority, budget billions of dollars for a border wall. House leader Nancy Pelosi refused.

The bill that reopened the government did not include significant wall funding, but did include one whole icebreaker and a down-payment on a second icebreaker. Alaska senator Lisa Murkowski praised the bill, citing "the importance of this vessel for the safety and security of the Arctic region and for our national security as a whole."

The Coast Guard told the GAO that Polar Star's service life would end as early as 2020. The Coast Guard announced in 2017 a plan to extend the heavy icebreaker's useful life by at least three years through selective upgrades costing a combined $75 million, starting in 2020.

But the service-extension might prove impractical, or at least cost more than the Coast Guard projected. "The Coast Guard’s $75-million cost estimate for the Polar Star life-extension project may be unrealistic, in part because it was based on the assumption of continuing to use parts from the decommissioned Polar Sea, as has been done in previous maintenance events," the GAO reported.

"Because of the finite number of parts available from the Polar Sea, the Coast Guard may have to acquire new parts for the Polar Star that could increase the $75 million estimate."

The longer America's sole, aged heavy icebreaker sails, the more she breaks down, the more it costs to keep her afloat and the more urgent her replacement becomes.

That replacement finally has funding.