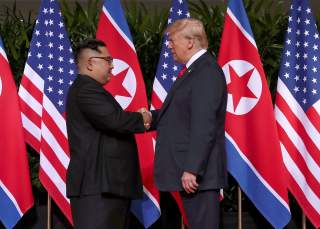 For a second time, the world’s collective gaze will once again turn to the Korean Peninsula as North Korea’s Chairman Kim Jong-un will once again meet U.S. President Donald Trump for another historic summit.

But how will this next meeting playout? Could a comprehensive deal be struck, changing the trajectory of U.S.-DPRK relations once and for all away from confrontation and threats of nuclear war? Is a smaller or interim deal where both sides embrace an action-for-action formula a more likely result, say trading the Yongbyon nuclear facility for sanctions relief? Or, is all this simply a waste of time and we are destined to return to the days of “fire and fury”?

“With Donald Trump and Kim Jong-un meeting for a second summit at the end of February, what do you feel will be the end result? Will both sides find a mutually acceptable framework that allows for the denuclearization of North Korea? Is a peace declaration that finally ends the Korean War possible? Will Washington offer some sort of “corresponding measures”? Or, is this summit the beginning of the end of what is only a short-term détente, with a time of tension soon to follow?

Below you will find a multitude of different perspectives from around the globe. Please note that these responses were collected over roughly one week with a filing date of Tuesday, February 5, 2019. We have done our best to ensure all content is timely and up to date.