Climate Solutions: What Congress Can Learn From the Dutch Farmer Protests 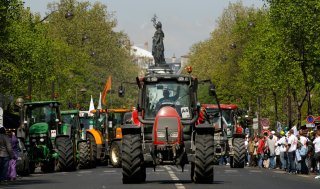 If Congress hopes to pass lasting climate policy, it should take care to avoid the mistakes of our European allies.

In the last few weeks, Dutch farmers have taken to the streets to protest new climate regulations on nitrogen oxide and ammonia emissions that will threaten the Netherlands’ agricultural sector and farmers’ livelihoods. A movement that started with tractors holding up traffic has quickly led to thousands of supporters flooding the Hague to show their support for farmers. American policymakers should learn from the Dutch protests. Curbing greenhouse gas emissions is a worthwhile goal that should be prioritized, but the top-down, regulation-heavy approach of the Dutch political class hurts economic and environmental well-being. Climate policy will be more durable when it is good for people. Bottom-up solutions that accelerate innovation and technological breakthroughs will deliver better economic and climate outcomes.

These new regulations could have serious consequences for the Netherlands’ agricultural sector. Small and family-owned farms, which represent a majority of farms in the Netherlands, do not have the means to change their farming methods like larger farms do. Mandating these emissions cuts will disproportionately hurt private farmers and could cut into budgets and profits by potentially forcing farmers to limit livestock production. The agricultural sector in the Netherlands contributed almost $16 billion to the nation’s economy in 2021 and was the second-largest food exporter in the world in 2020. Regulations that reduce food supplies will push up costs on households and add to decades-high inflation, which has already stalled climate progress.

As Congress looks to craft climate policy, it should take note of the Dutch frustrations. Rather than penalizing farmers to cut emissions, as the European Union has done, America’s policymakers should look to empower them. This starts by recognizing the incredible work that our farmers and ranchers have done to reduce their environmental impact. From 1948 to 2015, America’s agriculture sector tripled its total output while using 24 percent less land and 75 percent less labor. Innovation and new technologies have allowed American agriculture to feed a growing population while creating a smaller footprint.

By embracing solutions that are rooted in economic freedom, Congress and the Biden administration can build on this success. One solution, precision agriculture, would incorporate machine learning and modern technology to make planting and harvesting more efficient. Studies show that precision agriculture adoption increased corn and soybean yields on existing lands and allowed farmers to avoid cultivating another 10.2 million acres of new cropland, the size of 4.5 Yellowstone National parks. One case study on a family farm in Illinois found that adopting precision farming reduced per acre costs by $67 and lowered emissions by more than 15 percent. Opening up avenues for farmers to adopt precision agriculture and sustainable farming practices would benefit farmers, consumers, and the environment alike.

While the environmental and agricultural merits of precision agriculture are clear, the financial strain of purchasing new equipment can deter private property owners. Making immediate expensing a permanent fixture in the tax code would allow farmers to deduct the cost of newer and more efficient technology immediately, rather than over time, and effectively ease the burden of upgrading to more eco-friendly farming methods.

Not only do these tariffs make farmers pay more for equipment that would make their practices less carbon intensive, they also hinder the exportation of American innovation. Agricultural exports to China dropped from $24 billion in 2014 to $9.1 billion in 2018, due in large part to tariffs and trade wars. While policymakers are right to be tough on China, kneecapping our ability to trade has hurt American consumers and farmers.

Importantly, these trade barriers impede our ability to curb emissions worldwide. Due to the efficiency and precision of American agriculture, our farmers are able to grow and produce food in a manner that is far less carbon-intensive than what is grown overseas. As experts have astutely pointed out, “a pound of grain or beef exported from the United States almost always displaces a pound that would have been produced with more land and greenhouse gas emissions somewhere else.”

As the Dutch farmers' protests have shown, in order for any climate solution to have a lasting impact, it must increase human flourishing and accelerate innovation. Bottom-up solutions that advance technological solutions can achieve these goals. Policymakers in the United States must learn from the EU’s mistakes and pursue avenues to empower farmers and ranchers to build on the success of providing more families with food at a smaller environmental cost.