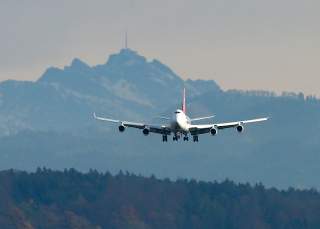 Taken on Nov. 7, 2018 the incredible video in this post, which appeared on CBC Nova Scotia Facebook Page, shows a Boeing 747 cargo plane after it had skidded off the runway while landing at Halifax Stanfield International Airport in Canada’s east coast province of Nova Scotia. Five crewmembers have been sent to hospital with minor injuries.

As reported by AP News, the plane wound up on a slight incline far off the runway, about 50 meters (yards) from a fence marking the airport perimeter. Two engines were sheared off completely.

Following its introduction in 1969, the Boeing 747 became a major success with airlines and the flying public. As the world’s first wide-body jetliner, the 747 had revolutionized air travel, and cemented its manufacturer’s dominance in the passenger aircraft market.