CNN Panel Laughs at 1 Candidates Chances Of Being Democratic Nominee 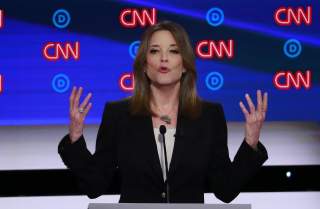 CNN panelists analyzing Tuesday’s presidential debate laughed at the idea of Marianne Williamson being the Democratic Party’s nominee in 2020, even after the spiritual guru’s surprisingly strong performance.

The mockery came even after CNN panelist Jennifer Granholm, a former Michigan governor, praised Williamson as “very resonant,” particularly on the issue of reparations for slavery and the Flint water crisis.

“She did herself some favor. I’ll be interested to see what happens,” said Granholm, who also noted that Williamson has been the target of mockery.

Williamson, an author who once advised Oprah Winfrey, has been derided for pushing a New Age philosophy not normally heard in the political realm.

“I know a lot of people like to mock her, but honestly I think she brought it for that,” Granholm said.

David Axelrod, another CNN panelist, then interjected to affirm Granholm’s assessment about Williamson.

“Jennifer, do you think she could be the nominee of the Democratic Party?” Axelrod, the former chief strategist for President Barack Obama, asked.

“Ok, I just wanted to clear that up,” Axelrod said.

Williamson does face long odds of winning the Democratic nomination. She is polling near the bottom of the Democratic field, along with New York City Mayor Bill de Blasio, Minnesota Sen. Amy Klobuchar, former Colorado Gov. John Hickenlooper, and several others.