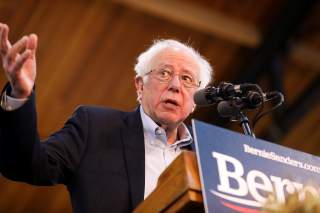 Tapper played a clip of Sanders comparing Pharma executives to murderers at a rally one week ago before asking the senator to defend his position on Sunday’s “State of the Union” show on CNN.

“Pharmaceutical executives see themselves as people who help save lives and improve lives, do you really see them as murderers?” inquired Tapper. “This is a philosophical issue we have to deal with,” replied Sanders, before launching into an extended discussion of the insulin market without ever defending his original characterization.

“You can call them whatever you want,” Sanders demurred. “I will tell you that as president of the United States we are gonna take on the pharmaceutical industry … what they’re doing involves corruption in my view,” he continued.

Sanders also promised that as president he would use anti-trust laws to break up what he believes is a medication monopoly, and appoint an attorney general specifically to prosecute drug manufacturers.

Sanders’ positions on pharmaceutical companies and public health care have earned him some criticism from other Democratic presidential candidates. Both Former Vice President Joe Biden and Democratic Minnesota Sen. Amy Klobuchar have called Sanders’ unrealistic, and advocate for other ways to lower the cost of medication, according to Open Secrets.

“People are dying, the cost has soared in recent years and you have three companies that control over 90% of the insulin market," Bernie Sanders says after comparing pharma execs to murderers #CNNSOTU pic.twitter.com/k6CkOm1PHX