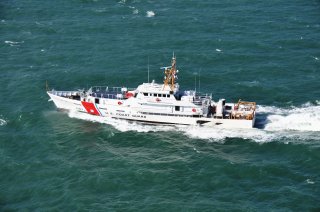 Bollinger Shipyards, who built the ships, announced in a press release that USCGS Clarence Sutphin is “the final of six FRCs to be home-ported in Manama, Bahrain, which will replace the aging 110’ Island Class Patrol Boats, built by Bollinger Shipyards 30 years ago, supporting the Patrol Forces Southwest Asia (PATFORSWA), the U.S. Coast Guard’s largest overseas presence outside the United States.”

Though not as heavily armed or armored as U.S. Navy ships, the Sentinel-class cutter does pack a moderate punch. Each ship is armed with a remote-controlled 25mm Bushmaster gun as well as four .50 caliber heavy machine guns.

Thanks to bow thrusters, the ships are highly nimble boats, able to turn on a dime. They’re also fast, with diesel engines propelling the ships to a top speed of twenty-eight knots. While the boats do not offer the same endurance as their larger Navy counterparts, they nonetheless have a five-day, nearly 3,000-mile range.

Eyes on the East

In a nod to the growing importance of the Pacific to all service branches, the U.S. Coast Guard also has a few Fast Response Cutters stationed in the Indo-Pacific. Three of the cutters — USCGC Frederick Hatch, USCGC Myrtle Hazard, and USCGC Oliver Henry — are stationed in Guam.

The FRCs are each named for a member of the Coast Guard who distinguished themselves, according to the press release.

"Clarence Sutphin, Boatswain Mate First Class, USCG, was awarded the Bronze Star Medal for his courageous actions during the invasion of Saipan Island in 1944," the press release said. "His citation reads: 'For heroic achievement in action against enemy Japanese forces during the invasion of Saipan, Marianas Islands, on June 15 and 16, 1944. Swimming with a line through heavy surf to a tank lighter stranded on a reef, SUTPHIN remained aboard under mortar and artillery fire until the boat was salvaged. Returning to the beach, he aided in salvaging another tank lighter under enemy fire and, when a mortar shell struck a group of eight Marines, promptly treated the wounded and moved them to a first aid station. His courage and grave concern for the safety of others reflects the highest credit upon SUTPHIN and the United States Naval Service.'”

The U.S. Coast Guard ordered a total of sixty Fast Response Cutters. There are forty-three currently in active service throughout the USCG fleet.

The Coast Guard’s Sentinel-class Fast Response Cutters pale in comparison to their larger, better armed, and protected Navy counterparts — but as Coast Guard boats, they don’t undertake the same missions. Compared to the smaller Island-class patrol boats they replace, the FRCs are a step up indeed.