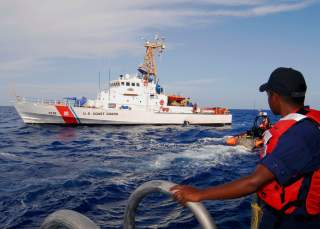 Self-propelled semi-submersible vessels are sometimes used by traffickers to smuggle drugs in the open sea he pointed out.

On Jul. 11, 2019 the U.S. Coast Guard (USCG) released a video showing service members jumping onto a moving drug smuggling vessel carrying 17,000 pounds of cocaine with an estimated street value of $232 million, according to a service spokesman.

The video was taken on Jun. 18 and features “Coasties” from the Cutter Munro leaping onto the self-propelled semi-submersible vessel, suspected of carrying drugs. The vessel moved alongside the cutter in the eastern Pacific. A crew member can then be seen busting open the hatch to find an unidentified man inside.

Self-propelled semi-submersible vessels are sometimes used by traffickers to smuggle drugs in the open sea he pointed out. Moreover Masson confirmed that the vessels are designed to hold large quantities of drugs and are used to try to evade detection.

“It’s moving pretty quickly and it’s a high-speed evolution at sea which is inherently dangerous,” Masson told referencing the video. “We mitigate those risks as best we can, but it demonstrates the dedication of the crew in keeping these illegal narcotics off our streets.”

The footage captured part of a month-long drug operation in which 39,000 pounds of cocaine and 933 pounds of marijuana were seized in international waters in the Eastern Pacific, according to a news release.

The release said the drugs “represent 14 separate suspected drug smuggling vessel interdictions and disruptions off the coasts of Mexico, Central and South America by three Coast Guard cutters between May and July 2019.”

Masson told Fox News the operations will lead to the prosecution of 55 alleged drug smugglers. He added that while some of the alleged smugglers will be handed over to federal authorities, others will be brought back to their home countries, where they will face international authorities.