Coast Guard Seizes 26,000 Pounds Of Cocaine In The Pacific Ocean 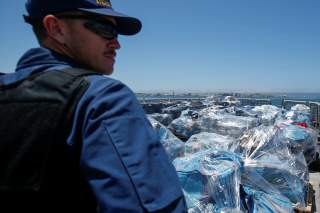 The U.S. Coast Guard seized over 26,000 pounds of cocaine worth more than $350 million from several drug busts throughout the Pacific Ocean, which it unloaded in San Diego Friday.

The Coast Guard Cutter Steadfast intercepted six suspected drug-smuggling vessels in the eastern Pacific Ocean off the coast of Mexico, Central and South America between late June and mid-July, according to a Coast Guard press release.

“This was 26,000 of cocaine that will not make it to the main streets of the U.S.A., and it also gives us the opportunity to make sure that we can continue to combat transnational criminal organizations that transport this cocaine deep in the Pacific every single day,” said Rear Adm. Peter Gautier, the 11th Coast Guard District commander, in a statement. “Because we know that with a supply chain of illegal narcotics, at every single step there’s violence, instability and despair.”

In one of the busts, the Coast Guard released footage which shows suspected smugglers throwing bags of cocaine overboard as their boat raced through the ocean July 18.

“The crew members apprehended the suspected smugglers and seized approximately 2,300 pounds of cocaine from the vessel,” according to the Coast Guard.

The last two fiscal years have seen a record number of drug seizures on the waters of the eastern Pacific, Coast Guard Lt. Commander Matthew Kroll said, according to NBC. Most of these seizures involved cocaine.

“This is still a very high number and we still have a few months to go,” said Kroll.

Gautier offers a similarly concerning assessment of the drug problem that exists on the eastern Pacific.

“There has been a spike in cocaine production in South America,” Gautier told NBC San Diego. “Eighty percent of the cocaine that arrives in America starts its journey in the eastern Pacific.”