Coffee Question: Is it OK for Teens to Drink This Much Caffeine? 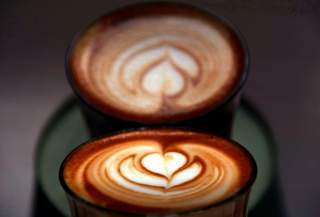 When my daughter was around 14 years old, she began to ask if she could have a cup of coffee in the morning like Mom and Dad. As a scientist who studies the effects of caffeine – the ingredient in coffee that helps wake you up – on kids, I had more information available to me to inform my answer than most parents would.

Many kids and teens consume caffeine. The main source of this chemical is soda for children under 12. Even colas have lower levels of caffeine than tea or coffee.

Kids and teens can also get caffeine from many foods and drinks, including chocolate, chocolate milk and iced tea. What’s more, some over-the-counter medications that kids might take, such as Excedrin, are significant sources of caffeine. But coffee is the main source of caffeine among Americans 12 years and up.

Based on my years of research, I’m confident that one daily cup of coffee won’t harm kids over the age of 12 – as long as they avoid all other sources of caffeine.

And since caffeine is in so many different foods and drinks, it’s easy for kids – or grownups – to get more than they should without realizing it.

Having too much caffeine can have many negative effects on kids, like putting them in a bad mood, depriving them of sleep and contributing to misbehavior, such as risk-taking and aggression.

Coffee can also make some kids feel jittery, nervous and anxious or nauseated. It can change their heart rate and blood pressure. In some cases, overcaffeination may make kids feel like they’ve used illicit drugs.

The threat to sleep might not sound like the most serious of all of these side effects to you. But it could be. The National Sleep Foundation, a nonprofit that funds and conducts research on sleep, recommends that teens get about nine hours of sleep per night. But studies show that on average kids get much less sleep than that.

Some adults may tell kids that drinking caffeine will stunt their growth.

There are two reasons why some people think that. First, caffeine can decrease the amount of calcium in your bones, which people used to think would make you not grow as tall.

Second, caffeine consumed later in the day can reduce sleep. Growth hormone, which makes you grow, is released early in sleep, so the idea was that less sleep would lead to less growth.

It turns out that neither of these concerns was valid. One study that followed 81 adolescents for six years found no connection between caffeine and bone density. Another study found no association between sleep duration and growth.

Based on the best science that is available, I’ve been allowing my three children to have one cup of coffee first thing in the morning once they turn 12. It is important to think about what else they’re getting with their coffee, however. Some of the sweet iced and flavored coffee drinks, such as Starbucks Frappuccinos, that are popular with kids have over 50 grams of sugar. And consuming too much added sugar can also have negative health consequences.

Any negative effects of the caffeine they get from that morning jolt wear off long before bedtime. But I don’t let them have any caffeine-containing products after 3 p.m. to protect their sleep.