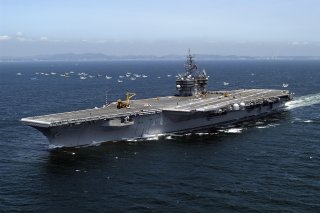 It is a well-known fact that U.S. carriers are some of the largest warships ever built and have the capability to speed past the world’s fastest submarines.

Thus, an enemy force being able to sink one of these behemoths would certainly send ripples throughout the U.S. military. And this is exactly what one Soviet submarine tried to accomplish during the peak of the Cold War.

It was way back in March 1984 when the eighty-thousand-ton USS Kitty Hawk (CV-63) Carrier Strike Group (CSG)—transporting more than eighty aircraft and eight escort ships—entered the East Sea to take part in a massive joint U.S.-Korean naval exercise.

According to defense writer Blake Stilwell at We Are The Mighty, “the carrier’s eighty aircraft and eight escorts were so engaged in the exercise that they didn’t detect a Soviet submarine chase the Kitty Hawk into the area. The submarine, K-314, was noticed by the carrier much later than it should have been. The Kitty Hawk turned on its engines to outrun and outmaneuver the Soviets.”

“The five thousand two hundred-ton Soviet Victor I-class attack submarine chased the American carrier for a week or so until the Yellow Sea began experiencing some pretty foul weather,” Stilwell explained. “K-314 would eventually lose sight and all contact with the Kitty Hawk and the other American ships. The skipper of the sub, Captain Vladimir Evseenko, decided to rise up to periscope depth and assess the situation from ten meters below the surface. What he saw surprised him—the American carrier strike group was only four or five kilometers from his boat.”

Evseenko eventually ordered an emergency dive but it was indeed way too late—the Kitty Hawk struck the submarine at full speed.

“The first thought was that the conning tower had been destroyed and the submarine’s body was cut to pieces,” Evseenko recalled.

“We checked the periscope and antennas—they were in order,” Evseenko continued. “No leaks were reported, and the mechanisms were okay. Then suddenly another strike! In the starboard side! We checked again—everything was in order. . . . We were trying to figure out what happened. It became clear that an aircraft carrier had rammed us. The second strike hit the propeller. The first one, most likely, bent the stabilator.”

Captain David Rogers, who was on the bridge during the incident, told reporters that “we felt a sudden shudder, a fairly violent shudder. We immediately launched two helicopters to see if we could render any assistance to them but the Soviet sub appeared to have suffered no extensive damage.”

Stilwell noted that “the carrier ran over the submarine’s stern, a point in the Victor I-class where the submarine’s sonar is blind due to the sounds of its own engines. The submarine, it turns out, failed to turn on its navigation lights.”