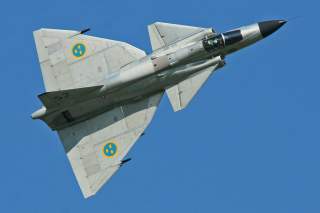 The most difficult phase on the intercept for pilots was during the steep climb, since they had to monitor their engine instruments to ensure they remained within the Volvo Flygmotor RM8B turbofan’s EGT limits, and also scan their radar screens.

At the height of the Cold War, when East-West tensions were at their greatest, Swedish JA-37 Jaktviggen (or fighter Viggen) fighter pilots were scrambled on 400-500 live Quick Reaction Alert (QRA)missions per year to intercept any unidentified aircraft approaching Swedish airspace.

QRA targets came from both Warsaw and NATO nations, and were usually flying close to Swedish airspace over the Baltic Sea or the Gulf of Bothnia.

No doubt the most challenging QRA targets were the U.S. Air Force’s Lockheed SR-71As, that often passed very close to Swedish airspace on their regular ‘Baltic Express’ missions.

The SR-71’s awesome performance capabilities provided a unique opportunity for Swedish fighter controllers and JA-37 fighter pilots to evaluate various intercept solutions against a high-speed, high-altitude threat, as Rolf Jonsson, a retired Swedish Air Force (Svenska Flygvapnet) fighter controller recalls in Paul F Crickmore book Lockheed Blackbird: Beyond the Secret Missions. “The most spectacular alerts in the Swedish Air Force during the eighties occurred about once a week, when the Blackbird was operating in the Baltic. These were also probably the most frustrating events of the entire Cold War, with our fighters trying to reach the same altitude and position as this high-speed, high altitude target, efforts which, if successful, would allow the fortunate pilot to catch a brief glimpse of the fantastic SR-71 at quite close quarters. When the SR-71 first began operating in Europe our air force was equipped with the Saab J-35F Draken and although intercept attempts were made, the aircraft’s performance wasn’t up to the task. However, one point was clear – the method that offered the greatest opportunity of success was a frontal attack, with both aircraft exactly on a 180° divergent heading – always assuming of course that the SR-71 didn’t turn! Other very important factors to try to determine when planning an intercept were the high altitude air temperature and the SR-71 altitude.

When the Saab JA-37 Viggen entered service, suddenly the mix was right; the aircraft’s performance and avionics capabilities combined with the eagerness of its pilots and a high degree of teamwork with the air command and control centres, including the radar tracker (a conscript), the intercept controller and the pilots.

For everything to work, the pilot needed to reach the speed and altitude that corresponded with information derived from the data tracker system in the Air Operator Centre (AOC). This data determined exactly where and when the pilot needed to initiate a pull-up from cruising altitude to acquire a radar contact. If the pilot failed to lock his radar on first time that was it, the opportunity was gone – at least for another week. On some occasions our pilots had problems locking-on because the SR-71 crew activated their defensive countermeasures systems, but pilots soon learned how to avoid triggering such systems. Also, an electronic counter-countermeasures system was built into the JA-37.

Another high performance aircraft operating from bases around the Baltic was the MiG-25 Foxbat; this has a speed advantage on the JA-37 Viggen, but the latter had a superior weapon system and, from 1981, was already using an information dissemination system similar to the Joint Tactical Information Distribution System the U.S. deployed later on tactical aircraft including the F-15 Eagle.

The most difficult phase on the intercept for pilots was during the steep climb, since they had to monitor their engine instruments to ensure they remained within the Volvo Flygmotor RM8B turbofan’s EGT limits, and also scan their radar screens. During this phase the pilot tilted his radar scan angle down, on its maximum of -15°. The radar then had just a few seconds to locate and then lock on to the target before the two aircraft passed one another with a combined speed closing speed of Mach 5; it was an extremely impressive spectacle to watch on radar from the ground! The intercept window was incredibly tight, and all the SR-71 pilot needed to do during the fighter’s final climb phase was manoeuvre just slightly and the intercept solution changed and failed. One of the main problems facing our Viggen pilots was that one of the rules in their Orders for Safe Flights stipulated that flight above 16,000m was prohibited without the use of a full pressure suit and these weren’t available, so our pilots needed to be careful or they would be grounded by their divisional commanders.

The SR-71 “Baltic Express” flights were usually known about an hour before the aircraft entered the area. The Blackbird always entered the Baltic Sea over a reporting point named “Codan”, located about 80km south of Copenhaghen and on a heading of about 090°. This usually triggered a scramble by a pair of JA-37s that were kept on alert at either F10 Ängelholm, F17 Ronneby or F13 Norrkšping, although sometimes even temporary bases like Visby were used. The best base for an SR-71 intercept, however, was F17 Ronneby, because this was best positioned for the acceleration and climb phase, about 30-50km southeast of Gotland and Öland.

The SR-71 Baltic Flight path remained the same throughout the time it operated in Europe and consisted of a singe anticlockwise loop that took about 30 minutes to complete. It remained in international airspace and first flew off the Polish coast, then just before the Bay of Gdánsk, well inside the Kaliningrad enclave, the aircraft muted turned left, onto a heading of about 015°. With the Blackbird now flying at 21-24.000m only the Su-15 Flagons based at Vainode, in Latvia, had a chance of making an intercept, and it’s doubtful that any of them were actually successful. Certainly the MiG-21 Fishbeds and MiG-23 Floggers based at Pamu, Haapsalu and Tapa in Estonia had no chance; their trails on our radar screens in Sweden were so harmless it was painful to witness!

The SR-71 then proceeded to a point about 60km west of the Estonian island of Saaremaa, where it began a long, programmed left turn, taking it onto a southerly heading of about 190°, rolling southeast of Stockholm. It then passed between the islands of Gotland and Öland, and this always impressed us because the corridor of international airspace between the two islands is only 3km wide; the Blackbird only violated our airspace once (this was the only time that it became necessary for the Swedish foreign department to protest about an airspace violation) when an SR-71 was forced to interrupt its high speed left turn, reduce speed and descent from its position in the north of its route due to an inflight emergency. [On that occasion, the SR-71 was forced to fly directly over Gotland – at this point AJ-37 strike Viggen pilots took hand-held photos of the Blackbird and it is clear to see from these that the aircraft was flying on one engine]. It was in this area that our JA-37 pilots carried out their practice intercepts. Once 56-74km southeast of Gotland and Öland, the “Baltic Express” turned onto a heading of about 265° and exited the area over the same point that it had entered.

Almost every time the SR-71 was about to leave the Baltic, a lone MiG-25 Foxbat belonging to the 787th IAP at Finow-Eberwalde in the German Democratic Republic was scrambled. […] Arriving at its exit point, the “Baltic Express” was flying at about 22km and the lone MiG would reach about 19km in a left turn before rolling out and always completing its stern attack 3km behind its target. We were always impressed by this precision; it was always 22km and 3 km behind the SR-71. [this would seem to suggest that these were the parameters necessary for its weapons system to effect a successful intercept if the order to fire was ever given.] This is interesting, since US Air Force intelligence specialists and SR-71 crewmembers believed that the only possibility of an interceptor successful engaging a Blackbird would be head on, a position given further credence by the fact that the DEF systems designed to tackle an airborne threat operating within the X-band (DEF A2) was forward-facing]. When the SR-71 detachment at Mildellhall was deactivated, the 787th IAP re-equipped with new MiG-29 Fulcrum, but even after the withdrawal, we believe that at least three Foxbats remained behind at Finow-Eberswalde, just in case the “Baltic Express” returned!”

According to Crickmore, the key to JA-37’s successes was the integration of a highly sophisticated datalink, which, until relatively recently, remained highly classified. The Swedish Air Force gained significant expertise in the datalink field with a system installed in the J-35F back in the 1956. However, the system installed in the JA-37 was far more capable than that of the Draken. It entered service in 1982 and it had the capability to upload and download data to four active aircraft of the same link; it was also capable of downlinking data from an airborne JA-37 to others still on the ground. Datalink information was displayed on the Horizontal Situation Display (HSD) and a tactical display, the latter using link symbology that could be overlaid with an electronic map on a multifunction display (MFD). As an integral part of the STRIL-60 command-and-control system that was built around it, the JA-37 could take off, attack, land refuel and rearm, then re-engage, with little or no voice communication, while enduring heavy jamming.