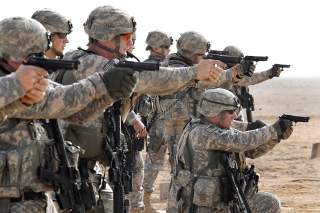 Colorado gunsmith Martin Grier has invented a new kind of rifle—one that can fire up to five rounds at a time through five carefully-aligned barrels, and also ditches traditional metal-encased ammunition for electronically-triggered caseless rounds.

The L4 and L5—respectively, the four- and five-barrel version of Grier’s rifle—are the sole products of Grier’s garage-based FD Munitions. And they’ve caught the U.S. Army’s eyes. Amid a flurry of media coverage, Grier is building, free of charge, a prototype L5 for the Army Research and Development Command.

But the partnership—which could result in a profound change in the Army’s approach to individual weaponry—almost never happened. Luck and the kindness of strangers made it possible, Grier told the National Interest.

“We did not seek out the military, because we weren’t quite ready,” Grier told me. “We planned to build a series of prototypes, in private, of increasing sophistication until we reached the point of pre-production readiness. Estimates of the funding needed, and disturbing events around the world, convinced us time was of the essence, so ready or not, we had to go public to get the help we needed.”

The show opened in January. “We scraped together enough to reserve the smallest space available,” Grier recalled. “Five of us met up in Vegas with a couple of travel trailers behind our pickup trucks and moved into an R.V. park. The Sands Hotel was out of the question. Too expensive, and they wanted us to trust them with our only prototype. No way.”

Grier and his crew hit the sprawling exhibition floor. “We did our homework, and identified fifty companies exhibiting that we thought might be interested in a partnership of some sort. We also hoped to meet potential investors. Long story short, things went viral. Everybody filmed us, and we’ve had, at last count, something like a million views on YouTube.”

That visit to Grier’s Colorado Springs workshop, involved officials from ARDEC and the Army’s Picatinny Arsenal. “I put it to them directly,” Grier said. “Are you interested in moving forward? The one-word answer: Absolutely.”

“After hearing the mind-numbing briefing about contracts, qualifications, research funding and numerous other—frankly—obstacles and realizing just how long it would take and how difficult it would be for my tiny crew, I made an offer. If we were to provide a prototype, without an order or contract, free of charge, would you test it?”

The Army’s answer: yes. Now Grier is hard a work building the Army’s L5 and two thousand rounds of ammunition to go with it. “ARDEC will get their prototype and ammo sometime next year, with any luck.”