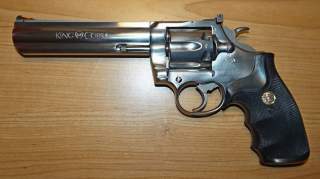 One of the most popular firearm series of the twentieth century—the so-called “snake guns” produced by Colt’s Manufacturing—is winding its way back.

Colt’s Manufacturing is one of the oldest firearm manufacturers in America. Founded in 1855 by famed gunmaker Samuel Colt, Colt practically invented the modern revolver, including such famous designs as the Walker, Dragoon, Paterson and Single Action Army. Colt’s handguns dominated during the westward expansion of America during the nineteenth century and played a key role in arming the Union Army during the Civil War. Colts have also become cultural icons synonymous with the concept of the revolver itself, with the Single Action Army a staple of Western and period films.

The post-World War II era saw Colt release what would eventually come to be seven lines of revolvers. The guns were all named after snakes—a somewhat odd choice considering Colt’s trademark symbol was a rearing horse. Between 1955 and 1998 Colt designed and sold the Python, Diamondback, Cobra, Anaconda, King Cobra, Boa and Viper. The lines spanned the gamut of calibers, barrel lengths and receiver sizes.

There were two revolvers named after the hooded, poisonous cobra snake: the Cobra and the King Cobra. The Cobra was a small caliber, six-round cylinder revolver available in .22 Long Rifle, .32 Colt New Police, .38 Police and .38 Special calibers. The Cobra was available in two and three-inch barrels, making it an excellent police backup gun, or four and five-inch barrels appropriate for a law enforcement service weapon.

In 2017 Colt relaunched the Cobra title, releasing what the company and enthusiasts refer to as the Third Model. This follows Colt tradition of numbering model releases, a tradition dating back to the mid-nineteenth century and the Colt Dragoon.

The new Colt Cobra line consists of three handguns. The first is the Colt Cobra, a small-framed revolver chambered in .38 Special and built with a two-inch barrel. This means the Cobra is an excellent concealed carry revolver, although the six-round cylinder makes it a little wider than five-round cylinder revolvers such as the Ruger LCR and Smith & Wesson 442. The Cobra is a double-action revolver with exposed hammer, made of stainless steel and rated for up to +P rounds. It features fiber optic sights for quick target acquisition in low light situations, a Hogue OverMolded rubber grip, and has an overall length of 7.25 inches.

Colt has released three variations on the Cobra revolver. The Classic Cobra, as the name implies harkens back to the twentieth century Colt guns, including features sure to invoke a sense of nostalgia in longtime Colt aficionados. The Classic Cobra includes a polished cylinder, wooden grips with the traditional rampant colt medallion, and a brass beaded front sight. The Night Cobra is still a stainless revolver coated with a matte black Diamond Like Carbon (DLC) coating, giving it a subdued appearance. The revolver features G10 fiberglass composite grips and features a bobbed hammer. Finally, the Bright Cobra features a bright stainless steel finish and walnut grips.

The new Colt King Cobra, released in 2019, returns a modern large caliber revolver design to the Colt company lineup. Like the old King Cobra the new series is built around the .357 Magnum caliber, with the additional capability of shooting .38 Special. The brushed frame stainless steel revolver features a six-round cylinder, a three-inch barrel, Hogue OverMolded grips and a brass-beaded front sight.

The reintroduction of the Cobra and King Cobra lines is a strong move by a company for whom revolvers have contributed greatly to the company's bottom line. At the same time, Colt has not done particularly well responding to the trend of high capacity nine-millimeter handguns. If the Cobra and King Cobra do well in the market we could see new variations down the road, particularly longer barreled models for general purpose use. While Colt’s may not resuscitate its entire line of “snake” revolvers a modest revival appears underway.