Colt's Python Could Be The Best Revolver Ever Made By Humans 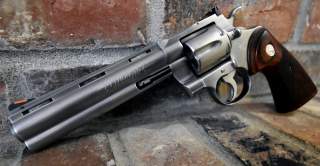 This article originally appeared in January of 2018.