Columbia-Class Submarine: The Most Stealth Submarine Ever Built? 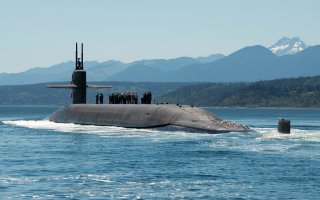 The entire premise of undersea strategic deterrence is based on the need for nuclear-armed ballistic missile submarines to hold potential attackers at risk of catastrophic destruction, without being found, detected, or seen by enemies in any way.

This reality, which is increasingly becoming more complex for submarine weapons developers, might explain why the Navy’s new Columbia-class, nuclear-armed ballistic missile submarines are being engineered to be the quietest, stealthiest submarines … ever to exist.

The new submarines will also need to be higher tech in the sense that they will need to be less detectable, due in large measure to the reality that enemy platforms capable of submarine detection are getting much more advanced through the use of longer-range, more sensitive sonar systems, harder to detect, long-endurance, small undersea sub-hunting drones and advanced methods of aerial submarine detection; some of these detection systems include the use of air-dropped sonobuoys, high-tech sub-hunting surveillance planes and other systems, including the use of surface and shallow-depth laser scanner technologies engineered to find subs on patrol.

In light of this kind of global equation, it is by no means surprising that the Chief of Naval Operations Adm. Michael Gilday’s CNO NAVPLAN text specifically cites the pressing need to deliver the new Columbia-class boats … “on time.”

The rapid and large-scale proliferation of undersea drones, many of them being quite small, quiet, and less detectable by submarine defenses, presents an entirely new threat calculus for submarine commanders who need to lurk quietly in undisclosed, undetectable, yet strategically vital locations.

Given all this, the U.S. Navy naturally needs larger numbers of highly-capable new ballistic missile submarines, but perhaps to an even greater extent, the new submarines may need to be the stealthiest undersea platforms ever to exist. This, interestingly, may in fact be the case due to a Navy effort to integrate an entire suite of new undersea warfare technologies into the Columbia-class.  These technical efforts, emerging after years of successful Navy Science and Technology work, are multi-faceted and wide-ranging, and some of them are even being migrated over to the Columbia submarines from the Navy’s Block III Virginia-class attack submarines. Several attack submarine innovations are being adapted for the much larger Columbia's, to include the use of a fiber-optic periscope cable enabling commanders to view surroundings within the submarine from different locations, and essentially not have to stand just beneath a periscope dropdown. The Columbia's also incorporate fly-by-wire computerized navigation controls which, unlike a mechanical hydraulic system, draw upon advanced computer automation to control submarine settings such as depth, speed, and other mission elements, of course when directed by a commander.

It is certainly quite likely that the Columbia may incorporate many as-of-yet unknown quieting technologies which, yet one item often discussed by senior Navy weapons developers is its electric drive technology. This high-tech, the electrical propulsion system is known to be much quieter than existing technologies, and also bring very crucial added amounts of mobile electrical power to the submarine, systems of great relevance given the large number of advanced electronics built into the submarine. Newer kinds of command and control, computerized or automated navigational systems, and electrically-powered weapons and sensor interfaces.

Yet another way to remain less detectable is through the use of missile-tube launched undersea reconnaissance drones. Many of these drones are now being built by the Navy to bring new launch and recover surveillance systems to undersea warfare through the use of missile tubes. The technical ability to dispatch and track unmanned sonar and underwater reconnaissance systems, increasingly able to share data in real-time with larger host submarine platforms, can enable a large Columbia class boat to linger more safely in “impossible to detect” locations, allowing forward-operating undersea drones to enter higher-risk areas to patrol for threats such as enemy subs.