To Combat Climate Change, Biden and Wealthy Allies Must Lead 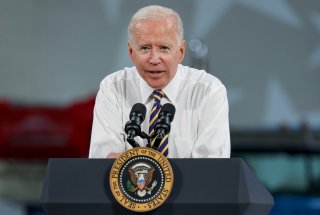 A new report issued this week by the United Nations-backed Intergovernmental Panel on Climate Change (IPCC) painted a bleak picture for the future of the planet. The body found that regardless of what efforts are made today to cut carbon emissions, Earth will warm by 1.5 degrees Celsius above pre-industrial levels in the next two decades. And while the mean global temperature has already increased by just over one degree since the mid-nineteenth century—ushering in an age of raging wildfires, devastating floods, long droughts, and deadly heatwaves—scientists agree that with a 1.5°C increase comes devastating environmental consequences not yet seen by humans: sea-level rise, water scarcity, mass extinctions, widespread crop failure, and so on.

In short, the worst is yet to come—and it will.

Still, the panel says, a concentrated and coordinated effort by the nations of the world to stop adding any carbon dioxide to the atmosphere by 2050 can prevent Earth from getting even hotter beyond the 1.5°C increase. Doing so means rapidly shifting away from fossil fuels (coal, oil, and gas) and the global energy infrastructure that supports their use, replacing them with zero-emissions renewable energy sources like biomass, solar, wind, hydro, and even nuclear power.

And while the report makes clear the urgency that is needed to act, a serious question remains: who is responsible for planning, funding, and building the global energy infrastructure necessary to achieve a clean, zero-emissions future?

The answer is absurdly simple and glaringly obvious: the United States and rich, developed countries of the Western world can and should lead the development of a carbon-free future—at no cost to poor, developing countries.

First, in assuming total financial and sociopolitical responsibility for building this zero-emissions world, Washington and its rich allies in North America, Europe, the Middle East, East Asia, and Oceania acknowledge that the benefits of the last two centuries of human development have been unfairly and inequitably realized. Rich nations became wealthy by employing carbon-intensive processes and making use of dirty fuels like coal, oil, and gas to build their economies, emitting billions of tons of extra carbon into the atmosphere. According to the World Bank, wealthy nations like the United States, Canada, Australia, and Saudi Arabia emit anywhere from fifteen to eighteen tons of carbon per capita on an annual basis—far and away the highest in the world even today.

Simply put, the logic of the infamous “Pottery Barn rule” applies to the climate emergency: no nation or collection thereof has benefited from (or historically made use of) the carbon-intensive model of economic development as much the United States and the rest of the Global North has. Thus, the onus to formulate a response to subsequent environmental consequences must fall to these same beneficiaries. Assuming as much would also help rich nations build credibility and trust with their developing sovereign counterparts. You break it, you buy it.

Second, the United States could use the urgent need for renewable energy infrastructure to help developing countries meet their growing energy requirements. Funding the construction of solar and wind farms, dams, digitized energy grids, clean transportation networks, and other hallmarks of “green” infrastructure could ensure secure, reliable, zero-emission energy sources to power economic growth for developing countries most affected by climate change. The need is fantastic: seventy percent of global future energy demand will come from non-Organisation for Economic Co-operation and Development (OECD) countries by 2040.

But for the United States, funding green infrastructure in the Global South should not be thought of as merely an act of righteous goodwill or an eleventh-hour Hail Mary to save the world from climate apocalypse. For Washington’s realists, it should be considered a Marshall Plan-like opportunity to win the great power competition with China. Outfitting developing nations with cutting-edge renewable energy systems would do wonders for American credibility on the world stage (something the United States has been lacking the last several years) while also beating Beijing at its own game.

Through the mammoth Belt and Road Initiative (BRI), Chinese president Xi Jinping’s signature foreign policy achievement, Beijing is funneling more than a trillion dollars into energy and infrastructure projects in Asia, Africa, the Middle East, and even Europe. While predictably opaque and self-serving—loan terms are often kept secret and many of the projects require the use of Chinese labor and companies—the BRI has been particularly criticized over its emphasis on dirty energy projects, including and especially coal (by far the worst CO2 emitter). The project currently supports more than two hundred coal projects in BRI signatory states, which includes highly-populated nations like Egypt, Indonesia, and Turkey, at a cost of hundreds of billions of dollars.

Considering the IPCC recommends that most coal-fired power plants worldwide must be shuttered in the next decade (and knowing that renewables are more cost-effective than fossil fuels), we can understand the BRI and its push to export the dirtiest energy sources as a means to exert Chinese geopolitical influence and keep Chinese energy firms open for business.

It is up to the United States and its wealthy allies to respond with a global infrastructure plan that places climate at the center, promising zero-emissions supply to meet vociferous energy demands. In order to ensure the widest possible appeal to developing states and sufficiently differentiate itself from China, America should avoid a loan-based funding regime that could push recipients, who are already wary of BRI-like fiscal traps, further into debt and exacerbate persistent graft and corruption.

Instead, Beltway policymakers and a consortium of other nations should cover the cost of new energy projects in full. Using a NATO-style arrangement, rich nations should contribute to a collective fund an amount equal to a percentage of their respective GDPs, guaranteeing a progressive funding system where the wealthiest governments pay the most. This body could also assuage transparency-related fears by committing to a set of principles affirming inclusive institution building, rule of law, environmental impact standards, fair labor practices, and basic human rights.

A heavily diluted version of such an arrangement was formed this summer. In June, the Biden administration announced a partnership with the G7 nations as part of the Build Back Better World (B3W) initiative, which will use government entities like the U.S. International Development Finance Corporation, the Export-Import Bank, and the U.S. Agency for International Development in conjunction with private investors to funnel hundreds of billions of development dollars into developing nations in need of infrastructure upgrades. The scheme is guided by the U.S. Department of State’s new Blue Dot Network, a network led by the United States, Australia, and Japan meant to create a consensus around transparency and quality standards as it relates to infrastructure building.

While certainly a welcome gesture, B3W and Blue Dot both place too much emphasis on “market-driven” solutions and not enough on climate, only making a passing reference to global warming and the Paris Agreement. And while coordinating with the private sector to build clean infrastructure is a must, the planet cannot wait until risk-averse markets, which by nature place profit above all else, deem any given project worthy of investment. Instead, an international industrial policy funded entirely by public dollars is needed to give any initiative the weight and urgency it requires.

Just as the Franklin D. Roosevelt administration used government authority to coordinate industry and allies in an effort to neutralize the Nazi German threat almost a century ago, so the world should today when trying to mitigate and adapt to climate change. To create an equitable, fair, zero-emissions future for all life on Earth, the United States and other wealthy nations must lead the way politically and financially. The undertaking may be the most expensive in human history, but as a species, we cannot afford the alternative.

Connor Sutherland is a recent graduate of Rutgers University, New Brunswick, and works as a program associate at the Council on Foreign Relations. He lives in Washington, DC.