Coming to Europe This Summer: Either the F-35 or the F-22 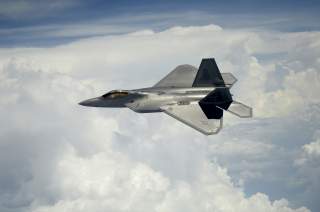 The United States will be deploying fifth-generation stealth fighters to Europe to reassure NATO allies and to deter Russia later this summer.

The Pentagon has not disclosed which fifth-generation fighter it intends to deploy to Europe for this mission, but the aircraft in question could be either the stealthy Lockheed Martin F-22 Raptor air superiority fighter or the F-35 Joint Strike Fighter.

“I would like to announce that we will be welcoming back U.S. 5th Generation assets into the European theater later this summer,” Gen. Tod D. Wolters, commander U.S. Air Forces Europe and U.S. Air Forces Africa, told reporters during a teleconference on July 25.

“These assets will work with U.S. and allied forces that are already in Europe including partner nation 5th Generation assets to build on the integration from previous deployments. The integration of 5th Generation assets allows the coalition to maintain the air superiority advantage by complementing the capabilities of our powerful 4th Generation fleet. These assets continue to be a game-changer in developing the right size and mix of capabilities to compete, deter and if required, win.”

The Pentagon would not reveal if the fifth-generation fighter in question is the F-22 or F-35 or even when the deployment would take place.

“And on top of all that, we’ll do all that we can with the 5th Generation asset to work on our campaign design of enhancing indications and warnings, command and control/feedback, and mission command.”

Given that Wolters said that one of the main goals of the deployment is to enhance integration between U.S. forces and allied partner nations, it more likely that the U.S. Air Force would deploy the F-35 than the F-22.

The United States expects to permanently base F-35 aircraft at RAF Lakenheath, England, starting in 2020 to replace the Boeing F-15C Eagle and F-15E Strike Eagle aircraft that are currently based there. It would make much more sense to familiarize European partners with American F-35 tactics, techniques and procedures if all of those allies will eventually fly the same aircraft.

Indeed, despite President Donald J. Trump’s rhetoric attacking America’s NATO allies, the alliance will almost certainly outlast the current administration. Thus, it is important that U.S. and European forces are able to operate seamlessly together for the foreseeable future. As such, future European combat aircraft such as the proposed British BAE Tempest fighter need to be interoperable with U.S. warplanes such as the F-35.

“I had the opportunity to see the unveiling of the Tempest at Farnborough electronically from afar, and I have not had any conversations with my counterparts in the UK specific to this aircraft, but we certainly had conversations about future systems,” Wolters said.

“One of the key ingredients that has to go into any future system is to make sure that it’s interoperable with existing systems, and certainly the systems that the UK is embracing as we speak. So the closest we’ve had in a conversation in that area is to ensure that as the UK decides to go forward with a system that could be called Tempest, that we would hope that it would be as interoperable as possible with the great system that they just acquired and they just received at Marham like the F-35B. That interoperability with 4th Generation capability, that interoperability with 5th Generation capability is powerful, and that, I’m certain, is probably something that the UK is looking very closely at.”