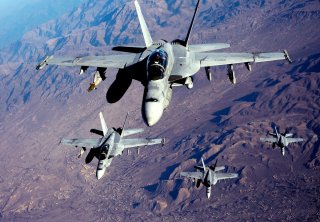 Could arming the F/A-18 Super Hornet with hypersonic missiles keep the aircraft relevant for the next decade or two as larger numbers of F-35s arrive and the service prepares for stealthy, highly-networked, 5th-Gen empowered, longer-range war?

Possibly. The decades’ old F/A-18 has gone through a large number of upgrades, adjustments, enhancements and service-life extension programs to preserve its combat functionality in increasingly high-threat environments. The U.S. Navy has spent years reinforcing the airframes of F/A-18s, upgrading weapons, adding new avionics, sensors and electronics and even integrating carrier-landing enhancing software to the jets called “magic carpet.”  The U.S. Navy has also engineered conformal fuel tanks for the F/A-18 to extend mission dwell time and potentially lower its radar signature.

The goal with all of this is to ensure that the 4th-gen fighter remains viable against a new generation of enemy sensors, weapons and air defenses.

What would a hypersonic cruise missile do for an F/A-18?

Possibly more than everything else by far given the attack dimensions, range and speed it would bring to the aircraft. A hypersonic, air-launched cruise missile fired from an F/A-18 would entirely revamp the tactical impact of the aircraft and massively change its operational envelope. It seems almost too obvious or self-evident to mention that firing a hypersonic weapon from an F/A-18 could help offset its vulnerability and enable it to attack much faster and at much greater ranges, thereby decreasing its exposure to air defenses and enemy 5th Gen aircraft.

Perhaps all of this helps explain why the Pentagon is now specifically configuring a hypersonic cruise missile able to fire from a carrier-launched F-18.

“We have a contract with Boeing to mature a dual nose scramjet design. They're working with Air Jet, and we're doing this so that we can have an option for the Navy that is compatible with their F-18,” Dr. Gillian Bussey, Director, Joint Hypersonics Transition Office, told reporters according to a Pentagon transcript.

A hypersonic cruise missile-armed F/A-18 would also bring new strategies and tactics to aircraft carrier power projection by bringing now unprecedented methods of attack in striking range of enemy shores. A maneuvering F-18 could adjust to air and ground targets quickly, and possibly get into an optimal offensive attack position much faster than a ship-launched weapon might be able to.

Engineering an F-18-launched hypersonic cruise missile able to achieve and sustain speeds at five times the speed of sound with the proper guidance technology is not a simple task, Bussey explained.

He cited six different technical areas of focus now capturing the attention of scientists, weapons developers and researchers. They include “materials and manufacturing, guidance, navigation and control, propulsion, primarily air-breathing propulsion, environments and … we are looking at issues related to warheads, and blast effects,” Bussey explained.