Coming Soon: Russian Submarines in the Gulf of Mexico? 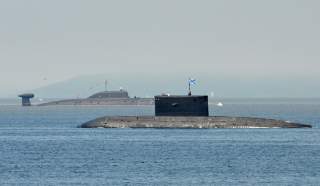 That threat comes after a U.S. Navy destroyer sailed into an area of the Sea of Japan, near the Russian port of Vladivostok, that is claimed by Russia. The USS McCampbell conducted a freedom of navigation operation (FONOPS) cruise to demonstrate that the United States does not recognize Russian sovereignty over those waters.

The McCampbell sailed on December 5 “in the vicinity of Peter the Great Bay to challenge Russia’s excessive maritime claims and uphold the rights, freedoms, and lawful uses of the sea enjoyed by the United States and other nations,” announced the U.S. Pacific Fleet. The Arleigh Burke-class destroyer can carry up to 96 Tomahawk missiles.

While the U.S. Navy did not provide exact details of the McCampbell’s route, Russia’s Defense Ministry said the destroyer did not come closer than 100 kilometers (62 miles) to Russian territorial waters, and was continually tracked by a Russian destroyer and aircraft. Just which waters were considered Russian territory wasn’t clear.

“Our submarines, too, might have surfaced suddenly some place in the Gulf of Mexico to shock America,” Korotchenko said. “We have the corresponding forces of our submarine fleet there. We do not do that for the simple reason our purpose is not to show off in such a silly way, but to cope with the assigned tasks.”

Interestingly, Russia claimed earlier this year that in 2013, its submarines did in fact sail into the Gulf of Mexico without being detected. A Russian submarine officer told Russian media (Google English translation here) that the subs—allegedly Akula-class nuclear-powered attack submarines armed with Kalibr cruise missiles—came within “missile strike distance from one of the main bases of American submarines.” The article hinted that the base in question was the U.S. Navy submarine installation at King’s Bay, Georgia, separated by the narrow Florida peninsula from the Gulf of Mexico.

Korotchenko warned that attempts to intimidate Russia were "useless and senseless."

"Russia has conducted a self-sufficient policy of its own and it keeps conducting it,” he added. “We defended our interests all along and we continue to do so."

Russia’s neighbor Ukraine would say that Moscow has an expansive definition of Russian interests. The USS McCampbell’s show-the-flag mission came after Russia’s seizure last month of three Ukrainian warships sailing in the Sea of Azov, which borders the Crimean peninsula (which was annexed by Russia from Ukraine in 2014). Several Ukrainian sailors were injured by Russian fire.

The Sea of Azov is supposed to be shared by Ukraine and Russia. Ukrainian president Petro Poroshenko has called for NATO warships to patrol these waters.

Russia's Navy is Deadly (But Why Doesn’t It Have Lots of Aircraft Carriers?)