The Coming Wars over Water? 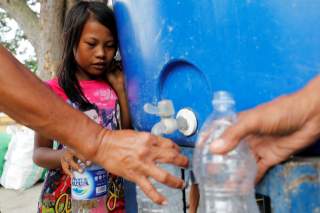 Across the globe, government planners constantly study and prepare for conflict scenarios threatening to destabilize their nations, borders or larger regions. Many of these concern peer-on-peer conflicts related to border disputes or competing national interests. Others focus on internal destabilization campaigns, transnational crime or international terrorism.

In many regions of the globe—from Northern Africa to the Middle East to Central and South Asia—efforts to manage internal freshwater supplies or conserve transboundary water agreements are under strain as scarcity rises in parallel with population growth, consumption and warming temperatures.

A World Bank study on the global water picture in 2016 noted that entire regions may see their gross domestic product decline by up to 6 percent by 2050 due to water-related losses in agriculture, health, income and property. The areas highlighted consist of many of the world’s largest population concentrations, regions with developing economies, intensive and unsustainable agricultural practices and high occurrences of drought.

Dam-building and its downstream effects across national borders—as in the case of Ethiopia’s Grand Ethiopian Renaissance Dam and China’s water diversion project from the Yarlung Tsangpo River in southern Tibet—threaten to escalate tensions or redefine national claims over disputed regions.

Such disputes could mushroom across the globe in the face of broader demographic and resource shifts.

According to the Pacific Institute’s water conflict chronology database, eighteen water-related incidents occurred in 2018 alone, ranging from violence erupting at protests over water management to outright fighting between competing communities over access to water and herding rights.

These incidents appear destined to become more a norm than an outlier as water resources are consumed faster than rainfall replenishment in some areas and limitations exacerbate longstanding tensions, be they ethnic, tribal or national-based. Delicate tradeoff systems between nations located upstream and downstream of major rivers threaten to be undone by disruptions, as in the case of Central Asian countries sharing parts of the Fergana Valley.

With water a vital and finite resource, the world’s industrialized nations are naturally protective of local supply and place a premium on water security in instances where water flows across shared borders. When mixed with political disputes or rivalries, resource pressures may act as a catalyst for armed conflict.

Wars over water resources are not without precedent. The Six-Day War of 1967, for instance, was in part an Israeli military response to a Syrian attempt to dam the Yarmuk River, a tributary of the Jordan River, a crucial water source for Israel.

Another potential flashpoint exists in one of the world’s most tense arenas: the border between India and Pakistan. There the potential repudiation of a water-sharing agreement brokered by the World Bank in 1960, the Indus Waters Treaty, would serve to further damage relations between Pakistan and India, potentially sending the two rivals spiraling into a conflict that might draw in other nations.

The treaty remains in place despite two wars conducted over that time between the neighboring rivals. This is a credit to the cornerstone of the agreement: the rational self-interest of both signatories. With water at a premium for both, any war over it would threaten the supply of each actor, thus ostensibly negating the pretense for armed conflict.

But with Pakistan facing declining water availability and blaming its situation on India's “water terrorism,” the potential for crisis increases.

India, which plans for a presumptive “collusive threat” on both its northeast and northwest borders from China and Pakistan, must tread carefully in order to avoid reciprocity from Beijing should the latter turn its back on water rationality. While India holds an upstream riparian advantage over Pakistan in regards to the Sutlej, Beas and Ravi Rivers, so too does China as it relates to major rivers flowing into India from Tibet.

Considering Pakistan’s water vulnerability—which involves exploding population growth, poor water utilization and infrastructure maintenance, and unsustainable usage patterns—any threat by India to abrogate the treaty or maximize its use of water from any of the rivers covered under the IWT would be seen by Islamabad as tantamount to an act of war.

Factor in Pakistan’s strategic alignment with China and any outbreak of conflict might draw Beijing into the scrum, thereby resulting in India confronting the two-front war its planners most fear. Under this scenario, in which three nuclear-armed nations conduct military operations at some level of intensity, the rest of the world would be left scrambling to mediate the crisis at zero hour.

However far-fetched such an incident might seem, it would behoove multilateral institutions, international non-governmental organizations and, most importantly, global leaders extending beyond Beijing, Islamabad and New Delhi to start figuring out how to defuse such potential clashes over water resources—resources increasingly under pressure across many of the world’s developing regions.

Daniel Darling is a senior international military markets analyst at Forecast International Incorporated, an aerospace and defense consulting firm located in Newtown, Connecticut, where he covers the Europe and Asia-Pacific markets.