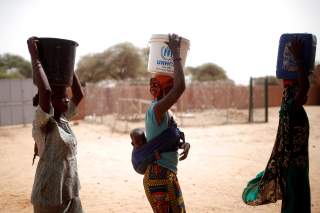 “Water, whether it’s fresh or salty, is one of the huge problems that is arising out of a changing climate,” said Geoffrey Kemp, senior director for Regional Security Programs at the Center for the National Interest. Kemp, a former senior director for Near East and South Asian Affairs on the National Security Council staff during the Reagan administration, was speaking at a Center for the National Interest event on September 26. That event featured panelists discussing water security and the Center’s newest publication, Water Crises, Security and Climate Change.

As a global phenomenon with widespread consequences, climate change is very much a “threat multiplier, that really amplifies global risks,” contended Sherri Goodman, a senior fellow at the Woodrow Wilson Center and a former Deputy Undersecretary of Defense for Environmental Security in the Clinton administration. She elaborated that “nowhere is better suited to tell this story than the Arctic.” Goodman described how rising temperatures are causing sea ice to recede and permafrost to melt, opening up a formerly inaccessible environment to geopolitical competition and economic opportunity. Various states, including China, have openly expressed their intentions to become “Arctic stakeholders” and are building and investing in land and naval capabilities that will allow them to take advantage of potentially lucrative resources and strategic territory.

But climate change is having an impact far beyond the Arctic. Syria, Bangladesh, the Maldives, Afghanistan, and Virginia all face a range of threats brought on by rising temperatures and seas levels. Yet, according to Kemp, as dissimilar as these places are, many of the starkest challenges that they must overcome have “global ramifications” and parallels.

For example, Kemp noted that a terrible drought in Syria has been established as one factor that precipitated the country’s unrest and eventually to a “massive exodus of Syrians to the neighborhood—to Jordan, Lebanon, and Turkey—and particularly in 2017, an exodus to Europe” that sparked a migration crisis and has “torn Europe apart.” The political consequences of this refugee crisis have been immense, and we will be reckoning with its consequences for years to come. Similarly, on the Indian subcontinent, rising seas and increasingly severe storms threaten to displace millions of Bangladeshis to neighboring India, leading New Delhi to construct a border wall along its border with Bangladesh. Kemp worries that this trend towards creeping “enclosures” at national and local levels is emblematic as societies around the world work to close off their territories to outsiders just as climate change is beginning to displace more people than ever before.

Moreover, Kemp observed that “freshwater scarcity is a factor in very tense relations between Iraq and Turkey”—where Ankara has been accused of withholding water upstream for major hydropower projects. Water is also an issue in Yemen, which has no natural freshwater resources and is in the midst of a civil war that has precipitated attacks on its water infrastructure. Iran and Afghanistan are facing severe water problems too, and terrorist groups have notably taken advantage of these deficiencies to achieve their ends; at times working with state actors in proxy conflicts against rival state adversaries, and, at others, working against the state in pursuit of their own purposes. Other countries like Egypt are struggling with similar water threats; saltwater inundation from rising sea levels is threatening coastal cities and agriculture in the Nile Delta, demand for freshwater is rapidly increasing from a burgeoning population, and upstream hydroelectric dam projects in Ethiopia are raising concerns about the Nile River’s sustainability. The solutions to these problems are economically costly and politically challenging.

America, too, will soon be dealing with increasingly difficult challenges due to climate change. From the Gulf of Mexico to Rhode Island, Alaska, and Virginia, “America’s low-lying cities, naval bases, and air bases are suffering from rising sea levels,” Kemp said, “and the costs of dealing with this have only just begun to be calculated. It is having a profound effect on everything from insurance rates and real estate prices—all around the country.”

Indeed, the Department of Defense has recognized that “we cannot walk away” from these challenges, said Dov Zakheim, Vice Chairman of the Center for the National Interest and a former Under Secretary of Defense during the George W. Bush administration. Zakheim warned that climate change is threatening over “$100 billion worth of facilities.” Furthermore, it is not just the coastal infrastructure that is at risk, but more inland facilities are increasingly being threatened by devastating hurricanes and floods, which Goodman said should be a “wake up call.”

So how do we attempt to address these many looming threats? For Zakheim, “it all comes down to funding,” although he does not believe “that any one country can solve the world’s problems with its money” and argued that limits on economic growth are counterproductive. Instead, he said it’s both a problem of governance and international cooperation and pressure. The panel widely agreed that while money can promote adaptive solutions by funding the construction of desalination plants, seawalls, and levees, these efforts are extremely expensive and will fail without a government that can promote sustainable practices and coordinate internal policies. In addition, the United States and others must synchronize their internal and foreign policies on this issue to have a chance of achieving real progress. “It is not clear to me that we are approaching this whole issue systemically,” Zakheim assessed, “and when you talk about ‘whole of government’ [approaches], it tends not to work. But sometimes, that’s what you need.”

Adam Lammon is a program assistant at the Center for the National Interest.