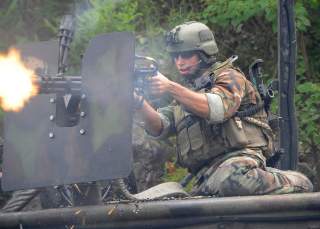 Since the terrorist attacks on Sept. 11, 2001, the U.S. military's Special Operations Command has gained manpower and money as well as responsibility for an ever-wider range of missions.

But now Congress is beginning to question, and push back against, the commando mission-creep.

USSOCOM is proposing changes that would, in addition to current responsibilities, include the responsibility for synchronizing the planning, coordination, deployment and, when directed, the employment of special operations forces globally and will do so with the approval of the geographic combatant commanders, the services and, as directed, appropriate U.S. government agencies.

Further, the proposed changes would give broader responsibility to USSOCOM beyond counterterrorism activities, to include activities against other threat networks.

But the world has changed in those nearly two decades. Congress increasingly has questioned SOCOM's sprawling responsibilities and recently ordered two separate reviews of the command.

Lawmakers in part were motivated by reports of misconduct by SOCOM personnel as well as by SOCOM's alleged participation in conflicts for which Congress did not provide authorization, specifically in Niger.

Four SOCOM troops died on Oct. 4, 2017 when militants ambushed their patrol in Niger in Central Africa.

"Prior to starting out on the ill-fated patrol, two junior officers, including an Army captain who remained at the base in Niger and the team leader, falsified a document to get approval for a mission to kill or capture a local ISIS leader," CNN reported.

"That mission was never approved by the proper chain of command, according to [an official] summary. A much lower-risk mission was instead submitted and approved. However, the team was unable to locate the ISIS leader during their unauthorized mission."

"Some believe this situation calls into question the adequacy of civilian oversight and control of U.S. SOF," according to CRS.

The reviews of SOCOM that CRS mentioned will "take an introspective look at U.S. SOF’s culture, roles and responsibilities, adequacy of resources, organizational structure and the adequacy of training, education and personnel," the research service reported.

"Some have suggested these provisions are a precursor for congressional and [Defense Department] actions to 'rein in and reorient' U.S. SOF from fighting terrorists to taking on nation-states, instead."

Aware that U.S. [special operations forces] are overburdened and that there is a need to find the right balance between continuing to challenge terrorist organizations while simultaneously addressing growing irregular warfare threats posed by nation-states, policymakers will likely make good use of the two forthcoming congressionally mandated reviews.

It is possible that over the next few years, significant public policy debates on the future of USSOCOM and U.S. SOF will be undertaken, potentially resulting in a number of changes.

After 17 years at the forefront of the global military campaign against terrorism, policymakers, defense officials, and academics are questioning the future role of USSOCOM and U.S. SOF.