To Compete with China in Space, America Must Ramp up Funding 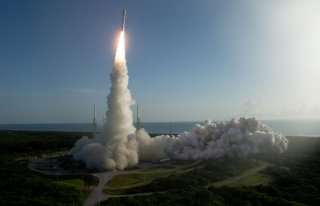 In recent weeks, much attention has been paid to the uncontrolled re-entry of China’s Long March rocket, which fell back to Earth last week. Missing from the coverage of the landing, however, has been the broader context: the fallen booster was the result of successful orbiting of the core module of China’s space station, which is expected to be completed by the end of next year. As such, it was a clear sign of Beijing’s growing emphasis on space.

Other signs of these ambitions abound. China has now become the second nation to successfully land a communicative rover on Mars, cementing its status as a premier space power on nearly the same footing as the U.S. Beijing has also made notable strides in civil space exploration in recent years, and developed counter-space weapons that pose a significant threat to U.S. space assets.

These steps are part of a clear strategy. By 2045, China seeks to become the dominant space power, and by mid-century, it aims to develop an Earth-Moon space economic zone potentially capable of generating $10 trillion in value per year. And while estimates suggest that China’s annual space expenditures now total between $8 billion and $11 billion, the country’s notoriously opaque space- and defense-related budgets make it likely that the actual figures are much higher.

What does this mean for the United States? The answer is worrisome because Beijing’s maneuvers are increasingly challenging U.S. leadership in the space domain. The waning of U.S. space primacy has largely been exacerbated by insufficient military and civil space funding. Currently, America is simply not funding space at a level commensurate with either its promise or importance.

It was not always this way. During the Cold War, space was widely recognized as a key battleground worthy of investment. The space domain holds even greater importance now, as new technologies make it more and more accessible. Yet, in this new era of great power competition, space funding remains an afterthought.

That’s a critical error because space investments offer immense tangible benefits for the U.S. economy. Space enables a number of economic sectors and critical national security capabilities, while the emerging space economy (currently a $385 billion sector) is projected to exceed $1 trillion in value in coming decades.

But for the United States to benefit from this emerging space economy and compete with China, more space investment is needed. Although recent initiatives (like the creation of the Space Force and NASA’s Artemis program) give the illusion of a healthy space budget, in reality, overall U.S. government space funding remains woefully inadequate. As we discussed in detail in a recent American Foreign Policy Council report, space funding currently suffers from several disturbing trends.

Most disturbingly, Space Force science and technology (S&T) funding lags behind that of the other military services. S&T accounted for just 0.9 percent ($130.9 million) of the overall Space Force FY 2021 budget of $15.4 billion, well below the other services and the 3.4 percent benchmark recommended for the U.S. Defense Department by former Defense Innovation Board Chairman (and current Chair of the National Security Commission on AI) Eric Schmidt.

The solutions to these challenges are straightforward. Congress needs to fund overall, NASA, and DoD space activities at levels commensurate with the Cold War era. Congress needs to ensure that at least 3.4 percent of the Space Force budget is allocated for S&T, and that the Space Force has its own basic research funding. Congress should also require proper and consolidated accounting for DoD space S&T programs. In addition, to better assess the competitive position of the United States in the space domain, Congress needs to task a formal national intelligence estimate of China’s civil and military space expenditures.

The bottom line is clear: space should not be seen as a bill to pay, but rather as an investment that generates tangible returns. If U.S. policymakers fail to make space a priority with upfront funding, then Beijing will likely make us pay substantially for it later.

Anthony Imperato is a researcher at the American Foreign Policy Council in Washington, DC.

Peter Garretson is a senior fellow in Defense Studies at the American Foreign Policy Council.