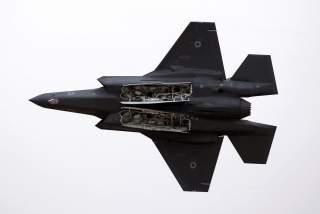 Key point: Israel has a special version of the F-35, the F-35I Adir. This version is modified for the kind of warfare Israel often wages and can do things America's stealth fighter cannot.

Israel unveiled its second F-35i squadron to coincide with the new year at its Nevatim Airbase where its F-35s are based.

This is a milestone for Israel which received its first F-35s in 2016 and declared its first squadron operation in December 2017.

Israel’s F-35i is a modified version with unique features.

Israel is expected to acquire at least 50 of the Lockheed Martin jets amid rising tension with Iran. It fulfills Israel’s desire to have a qualitative military edge over adversaries throughout the Middle East.

The F-35i has been kept under wraps and extreme security by Israel, however, the country has been slowly illustrating the plane's effectiveness.

In photos shown in May 2018 the F-35 was pictured flying over Beirut. At the same time, the plane was said to have carried out its first combat sorties from Israel.

Also, Israel recently hosted its Blue Flag exercise where its F-35s flew alongside Italian F-35s and US warplanes. Israel has said that its Air Force has carried out more than 1,000 airstrikes in Syria against Iranian targets over the last years and Israel has also hinted that it has struck Iranian-backed militias in Iraq.

The second squadron for Israel was announced in a ceremony Thursday, January 16 in a ceremony with Air Force Commander Major General Amikam Norkin.

The squadron will be labeled the 116th Squadron Lions of the South, alongside the first F-35i squadron dubbed Golden Eagle. The 116th Squadron has previously used F-16s and other planes going back more than 60 years. Re-established for the F-35 “Adir” planes it carries with it Israel’s long history of air superiority in the region and projecting Israeli power hundreds of miles from the country’s borders.

Gary North, vice president for Customer Relations of Lockheed Martin say that the F-35i is absolutely the weapon of choice against a high-threat environment. “Stealth allows the pilots to go wherever they have to go.”

Lockheed delivered 6 F-35s to Israel in 2019 and will continue delivering six per year through 2024. So far Israel has 30 of the jets and 30 more are coming in the next years. The next delivery is estimated for the summer of 2020. Lockheed said in December that it had delivered 134 F-35s worldwide and the 5th generation jet was not meeting the efficiencies and costs that the company’s target of $80 million an aircraft represents. There are now 490 F-35s operating in 21 bases around the world.

“From this moment, the 116th Squadron returns and becomes part of our strategic arm, part of our qualitative advantage over our enemies,” Norkin said at the ceremony.

Seth J. Frantzman is a Jerusalem-based journalist who holds a Ph.D. from the Hebrew University of Jerusalem. He is the executive director of the Middle East Center for Reporting and Analysis and a writing fellow at Middle East Forum. He is writing a book on the Middle East after ISIS. Follow him on Twitter at @sfrantzman. This first appeared earlier in January 2020.