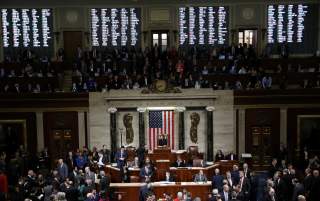 As I’ve argued repeatedly, Congress is a shell of its former self.

In last Sunday’s Washington Post, Paul Kane made the same point specifically with respect to Congress's upper chamber. He wrote:

The Senate tasked with holding President Trump’s impeachment trial would be unrecognizable to most of its predecessors . . . By almost every measure, today’s Senate is the least deliberative in the modern era of a chamber that bills itself as the world’s greatest deliberative body.

Congress’s weakness threatens liberty because it reflects a breakdown of the Constitution’s structural check on overbearing government. In modern America, policy flows from regulatory agencies known in the aggregate as the “administrative state.” From 1995 to 2017, the executive branch issued over 92,000 rules, compared to 4,400 laws enacted by Congress.

Over the last forty years, alas, Congress abandoned oversight of the agencies it had legislated into existence. Meanwhile, the president’s grip over administrative policymaking tightened with each successive administration.

With Congress M.I.A., the president has become the policymaker-in-chief at the head of the administrative state. Indeed, the presidency has become so powerful that one of the two parties in Congress—roughly half the legislature—loses interest in executive overreach whenever “their guy” occupies the White House.

Our constitutional system of separate and competing powers—a bulwark for liberty—is dangerously out of whack. Which raises a crucial question: What do we do about it?

In the latest issue of InFOCUS quarterly, I offer a menu of options to “Make Congress Great Again”:

So, how do we make Congress great again?

Congress might be compelled to get its act together, even if it doesn’t want to.

For almost 80 years, the Supreme Court has refused to police how much power Congress transfers to the executive branch . . . [Yet] [f]or the first time since the New Deal-era, a majority on the Supreme Court has expressed a willingness to revisit the nondelegation doctrine. Were the Court to add teeth to its “intelligible principle” test, then Congress would be forced to curtail the breadth of its delegations to the executive branch.

Turning from the Supreme Court to Congress, there are many institutional reforms that the legislature could take to empower itself vis-a-vis the presidency.

Starting with the easiest measures, Congress could remedy its anemic staffing. In fact, the current level of committee staffing is commensurate with levels from the early 1970s, even though government has grown much larger and more complex in the five decades since.

Congress also could create new institutions to better compete. In the early 1980s, the president unilaterally established the Office of Information and Regulatory Affairs (within the Office of Management and Budget) to manage regulations out of the White House. Yet Congress has no commensurate capacity. There is an obvious need for Congress to create its own comparable mechanism to oversee agency rules.

Congress could adopt simple legislative fixes. For example, lawmakers used to regularly limit the clock on their delegations, such that an agency’s regulatory authority expired after a given time. These “sunset” provisions force Congress to periodically review the programs it creates, before these regimes are re-authorized.

Or lawmakers could make greater use of “resolutions of disapproval,” which allow them to veto individual regulations . . .

If it wanted to get bold, Congress could pass more comprehensive reform. The Regulatory Accountability Act, for example, would require agencies to better justify rules that cost more than $100 million.

And if Congress wanted to regain the upper hand in one fell swoop, the House and Senate would get behind the REINS Act, which would require both chambers of Congress to approve all major regulations before they took effect.

These reforms are fantastic ideas, to be sure, but they’re all nonstarters for as long as love of party trumps institutional pride in Congress. You can lead a horse to water, but you can’t make it drink. Even were Congress to pass REINS, no doubt the House and Senate could find a way to avoid accountability.

Most likely, we need a new type of lawmaker, one who is cut from old cloth . . .