Congress Threw $2.2 Trillion At Coronavirus—Here Are the Unintended Consequences 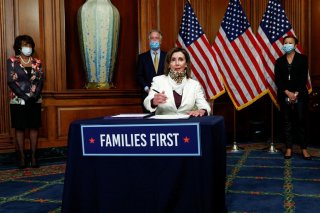 As the $2.2 trillion CARES Act sailed through Congress, the general mood was that money had to get out the door as quickly as possible to provide relief for households and businesses.

Details were of second‐​order importance – lawmakers simply wanted dollars flowing to businesses through loans and payroll support, to households through checks, and to those laid off because of COVID-19 through more generous unemployment insurance benefits. One might say Congress threw everything but the kitchen sink at the relief effort, in the hope that at least one program would cover everyone suffering.

Well, it turns out there are unintended consequences of throwing dollars through programs with different aims simultaneously. One obvious example is how the more generous benefits for unemployment insurance and the small business‐​focused Paycheck Protection Program come into conflict.

As a result, many workers would now be better off out of work than in work, even more so given going to work brought greater risk of contracting the virus. Senator Lindsey Graham, and several commentators, pointed this out as a problem at the time. But his concerns were largely dismissed — paying people to stop activity was seen as a feature, not a bug.

At the same time, the recently expanded Paycheck Protection Program aimed to supply small businesses, hospitality industry companies, and some other eligible businesses with federal guaranteed loans to cover costs, such as payroll, rent, and utilities. But the main aim of the program was for businesses to keep employees on payroll. To do this, businesses were given a financial incentive: the loans would be forgiven if the business avoided cuts to headcount or curbs on wages over eight weeks after funds were dispersed. The more payroll outlays fell, the smaller the part of the loan forgiven.

Can you spot the problem businesses face yet?

Employees might often find themselves financially better off in the short‐​term if they are laid off. But if employers want to have the PPP loan forgiven, they have to avoid having reduced headcount. Some employees are urging employers to lay them off, while many employers are desperate to retain or quickly rehire those same workers to keep their businesses viable through a forgiven loan.

Now, employees can’t just leave the business unilaterally to start claiming unemployment insurance. At least in theory, they must be fired. But what we are seeing is that these laws combined are putting business owners in a very difficult position.

CNBC reports on a spa owner informing her staff of success in obtaining a PPP loan, for example:

When Black‐​Lewis convened a virtual employee meeting to explain her good fortune, she expected jubilation and relief that paychecks would resume in full even though the staff — primarily hourly employees — couldn’t work.

She got a different reaction.

“It was a firestorm of hatred about the situation,” Black‐​Lewis said.

The animosity is an unintended consequence of the $2.2 trillion coronavirus relief package enacted last month.

On Twitter, one business owner said that he tried to keep a skeleton food service going, but workers were anxious about interacting with each other, so he laid them off so they could claim unemployment insurance. Yet that made applying for PPP problematic, because he would have had to rehire staff who currently would prefer not to work. So he passed up on the PPP, meaning he is still facing bills with no assistance. NPR reports too of a coffee shop owner in Harlan, Ky. who closed her doors after employees urged her to lay them off so that they could obtain unemployment insurance.

…we realized that we needed to hire back some of our staff to help with the demand. That proved harder than we expected.

We started making the calls last week, just as our furloughed employees began receiving weekly Federal Pandemic Unemployment Compensation checks of $600 under the Cares Act. When we asked our employees to come back, almost all said, “No thanks.” If they return to work, they’ll have to take a pay cut.

More generous unemployment insurance, in other words, is making laid off workers less likely to accept re‐​hiring and current employees more likely to request employers lay them off. But PPP loan forgiveness for businesses is conditional on them not reducing headcount or wages for eight weeks. So businesses suffer financially for doing what is financially better for many of its employees. The two programs directly clash in terms of incentives and are producing discord in the businesses Congress sought to keep mothballed.

This article by Ryan Bourne first appeared in CATO on April 4, 2020.