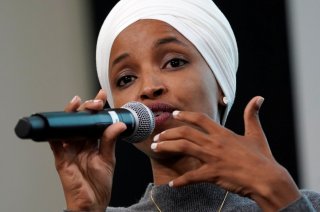 Congressional Democrats are seeking to restrain the President’s power to use military force against Americans after President Donald Trump threatened to deploy the U.S. military against protesters earlier this week.

U.S. law prevents the military from getting involved in domestic law enforcement, but the Insurrection Act of 1807 allows the President to deploy the armed forces against serious rebellions. Trump hinted that he might invoke the act in response to civil unrest surrounding the death of African-American citizen George Floyd.

Republicans say that military force is necessary to stop peaceful protests from devolving into chaos, but Democrats worry that the Insurrection Act could serve as a cover for a power grab.

“Rather than sending leading our country with integrity and decency in this tumultuous time, the President has all but declared war on his own citizens,” Rep. Ilhan Omar (D-Minn.) said in a statement. “Trump is willing to twist [the Insurrection Act] and use it instead to trample civil rights and enforce his own political will.”

Omar and two other progressive Democrats—Mark Pocan (Wis.) and Pramila Jayapal (Wash.)—promised a bill in the House of Representatives to prevent the Insurrection Act from being used without consent from Congress.

Sen. Richard Blumenthal (D-Ct.) said during a Senate Judiciary Committee meeting that he would introduce his own measures in the Senate next week in order to “restrict the overbroad and virtually undefined powers of the President under the Insurrection Act.”

Democrats seemed particularly rattled by the chaos outside the White House on Monday.

Trump gave a speech threatening to “deploy the U.S. military and quickly solve the problem” if states did not deploy their National Guard units. The President marched across nearby Lafayette Park—which had been forcibly cleared of protesters—flanked by General Mark Milley, Chairman of the Joint Chiefs of Staff, in battle dress uniform.

“American servicemembers deserve better than the charade Trump has decided to enlist them in,” Rep. Ro Khanna (D–Calif.) told the National Interest through a spokesperson. “They are trained to protect our country from our enemies, not peaceful protesters exercising a constitutionally protected right to free speech.”

“America’s downtowns cannot be made to look like war zones simply because President Trump thinks that makes for a better visual,” he added.

Senate Republicans, however, are eager to use military force to stop what they see as full-blown anarchy.

“One thing above all else will restore order to our streets: an overwhelming show of force to disperse, detain and ultimately deter lawbreakers,” Sen. Tom Cotton (R-Ark.) wrote in a New York Times op-ed on Wednesday. “The pace of looting and disorder may fluctuate from night to night, but it’s past time to support local law enforcement with federal authority.”

He accused left-wing militants of “infiltrating protest marches to exploit Floyd’s death for their own anarchic purposes.”

Cotton had previously called on the military to give “[n]o quarter” to “insurrectionists, anarchists, rioters, and looters.”

But the biggest roadblock may come from within the military itself.

“The option to use active duty forces in a law enforcement role should only be used as a matter of last resort, and only in the most urgent and dire of situations,” he said. “We are not in one of those situations now. I do not support invoking the Insurrection Act.”