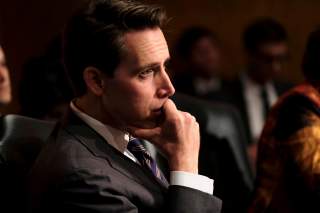 Sen. Ted Cruz of Texas said he has serious doubts about Ozerden’s conservative bona fides and would vote against his confirmation on Sept. 12. Both Cruz and Hawley sit on the Judiciary Committee. As such, Ozerden will need Democrat support in order to advance from the committee to the Senate floor with a favorable recommendation.

Cruz grilled Ozerden during his July 17 confirmation hearing, saying Ozerden has few discernible connections to the conservative legal movement. Many of President Donald Trump’s judicial nominees worked in Republican administrations or are affiliated with conservative cause lawyering groups and the Federalist Society.

Ozerden is a federal trial judge in Gulfport, Mississippi and a close friend of acting White House chief of staff Mick Mulvaney. Legal conservatives mobilized against Ozerden well in advance of his formal nomination, citing several decisions which in their view deviate from right-wing legal orthodoxy.

In one case, Ozerden dismissed a challenge to the Affordable Care Act’s contraception mandate from the Catholic Diocese of Biloxi. The judge dismissed the case on a technical issue, saying the Obama administration was still amending the relevant regulations, making a legal challenge premature.

Ozerden has also approvingly cited several cases which derive from the Supreme Court’s 1992 decision in Planned Parenthood v. Casey, in which a fractured Court upheld the core of Roe v. Wade. The dispute involved a civil rights lawsuit a Mississippi woman brought against a county police officer for sexual misconduct. Ozerden ruled that the woman’s lawsuit could proceed, saying the alleged conduct would violate the 14th Amendment right to bodily sovereignty if proven true.

As a general matter, some legal conservatives have questioned Ozerden on competence grounds. Carrie Severino of the Judicial Crisis Network has described the legal analysis in some of Ozerden’s rulings as “unduly curt.”

A Navy veteran and graduate of Stanford Law School, Ozerden was an attorney in private practice before former President George W. Bush appointed him to the U.S. District Court for the Southern District of Mississippi in 2007.

The Department of Justice did not immediately respond to the DCNF’s inquiry.