Coronavirus and the American Frontier Spirit: An Opportunity for Change 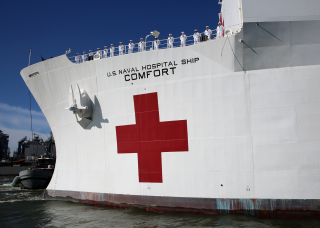 The famed historian Frederick Jackson Turner delivered a lecture in 1893 that has gone down in American historiography as near-myth. “The Significance of the Frontier in American History” has been hotly disputed in recent decades, but its essential thesis—that diverse settlers being forced by the brute circumstances of frontier life to conquer nature and organize themselves in a rugged society is the sociological foundation of American individualism and American democracy—inspired historians for decades. And to the degree that the historians of the early and mid-twentieth century shaped America’s consciousness of its own national identity, Turner has lived on as one of the chief historical interpreters of the American experience.

Obviously, the "Western frontier" period has ended in American history (although whether it was in the 1840s, the 1890s, or 1930s does not really seem to matter). With that world went the literal way of life embodied by figures like Theodore Roosevelt, Wild Bill Hickock, Buffalo Bill Cody, Sitting Bull, Owen Wister, Annie Oakley, Jim Beckwourth, Kit Carson, and so many other half-mythical figures of the American past. The passing of the physical frontier though did not diminish its effect on the American soul and, more importantly, on American behavior. No sooner had the trail’s end been declared than adventurous Americans started finding new frontiers to tame.

In the most literal sense, there is of course the legacy of American internationalism and imperialism, which received its first great boosts with the filibustering conquest of Hawaii in 1893 and the crusading seizures of the Philippines, Guam, and Puerto Rico in 1898. Plenty of interventions into Latin America followed, and of course the American involvement in World War One was a turning point in American diplomatic history—one which foreshadowed a century and more of active international involvement.

Then there’s the economic history. Although huge fortunes had started to accumulate by the 1870s, and unscrupulous hustling had always been Americans’ forte, America in the early twentieth century simultaneously pursued ever-larger concentrations of wealth, coupled with never-before-tried experiments in economic reform that testified to Americans’ restlessness and desire to shape their own world. Finally, there was the progress of science, most especially regarding electricity and that strangest new field of experimentation, flight. The early heroes of aviation were cast as heroic in the same way Lewis and Clark or John Wesley Powell were heroic, as were the early generations of astronauts.

Although frontier rhetoric has declined sharply in recent decades—perhaps testimony to the decadence New York Times columnist Ross Douthat has been documenting for us—it seems clear that extrapolations of new frontiers, their conquests, and the cultural effects on us "conquering Americans," have made for an integral part of the American identity even in the relatively secure and affluent situation of twenty-first century modernity.

There is one sort of frontier which appears to be truly timeless, and despite all our conceits to the contrary, and despite all the creature comforts and weird contraptions and petty prejudices of our time, it is one we haven’t mastered and probably never will. That frontier is the natural world itself.

Climate change probably exacerbates most of the problems of extreme weather, but even if it weren’t happening, we’d still have hurricane season, severe droughts, polar vortexes, periodic riverine floods, and any number of other meteorological blights. The 2017 hurricane season—in which Hurricanes Harvey, Maria, and Irma among others battered the Caribbean, Latin America, and the American Southeast, and captured the American imagination—displaced thousands of Americans and destroyed billions of dollars’ worth of property. The 2018 and 2019 California wildfires caused similar mass destruction all across the Golden State, and various other wildfires simultaneously raged across the western United States.

Then there’s the less frequent but equally traumatic extreme weather events—the tornadoes, the blizzards, the Mississippi floods, and more—that ravage other parts of the country, especially the broad, flat Midwest. And at this point, we don’t even know how we’d respond, socially and institutionally, to a major earthquake, a Pacific Northwest tsunami, or a massive crop die-off. American institutions—governmental, public-private, charitable, corporate, and civic—have all done reasonable jobs at responding to these crises and aiding communities in their recovery efforts. Response, recovery, and mitigation rule the day. But funding, manpower, and institutional coordination remain key challenges during each of these events, and will likely be so in the foreseeable future.

So it is with our present crisis: the COVID-19 pandemic—the first global pandemic in our lifetimes to so fully dominate our imaginations and our livelihoods as to shut down entire industries and close off entire cities, even entire countries. It’s a daunting and chilling reminder that we human beings, despite our very real civilizational progress and scientific understanding, are not the masters of the natural world we’ve sometimes imagined ourselves to be.

In America, the response was muffled at first, but as soon as a few key decentralized actors started making decisions—conferences and concerts being cancelled, universities sending their students home—the rapid national follow-up was swift, and for the most part Americans seem to be cooperating with each other to slow the virus’s spread. It didn’t catch us off-guard, per say—we had months’ worth of warnings from around the globe and from our own experts. It just surprised a lot of us, it seems, that it actually happened—that our free and pluralistic society could be jolted into mass collective action by a common natural threat.

Thus the natural world and its raucous behavior is, in a strange sense, a frontier we’ve never really mastered, one which we must always be on guard against. The hurricane season will come and go, as will the wildfires, as will the pandemics, as will all the rest. There’s nothing we can do to stop them from coming. There’s nowhere to run, and nowhere to hide. The damage will be done. We live in nature’s world. We live on an endless frontier.

But we can prepare, endure, react, and rebuild. Matt Frost wrote an excellent essay at The New Atlantis a few months back singing the praises of adaptation and mitigation amidst the ongoing reality of climate change; and as a citizenry, we should more explicitly adopt the language and mindset of adaptation and mitigation in an age where our natural disasters, be they microbiological or meteorological, stand only to get worse, and more disastrously disrupt our complex and networked social organism.

And as the nobler aspects of our collective response to the coronavirus are demonstrating, adaptation and mitigation is not something to be left merely to the first responders and public leaders. It is something we as private individuals, as the people affected by these disasters but also as integral parts of the solution to these disasters, should be thinking about as well.

Washington DC mayor Muriel Bowser recently issued a call for volunteers for the city's Medical Reserve Corps to assist medical professionals in handling the COVID-19 response. The MRC, it should be noted, is a national network of local organizations that help public health agencies respond to situations like this. They take both medical professionals and the rest of us, as in crises like this, everyone can lend a hand.

A national drive to recruit volunteers across the country to their local Medical Reserve Corps units, coordinated between various national political leaders, civic leaders, and even celebrities, might be a good way to help boost the manpower and funding shortages emergency responders and medical professionals inevitably will face, and even a good way to help boost national morale, and give ordinary citizens a higher stake in the war on coronavirus.

A lot of young people are sitting around their parents’ houses now, reading panicky reports and sharing dank memes. Why not give those who are willing an outlet to be of service? Having a non-medical volunteer doing check-ins and preliminary surveys at a testing center frees up a medical professional to treat the sick. Someone who can’t volunteer might want to donate to help those in the field. Business leaders might be further compelled to move production towards medical necessities. And so on and so forth.

More could come of this. The grand strategy of mass social mobilization efforts has always been to make for a more "prepared" citizenry, capable of rising to collective action to do what government bureaucrats and private philanthropists cannot do alone, but which is necessary for the common good.

On the homefront during the First World War, the Boy Scouts of America conducted scrap-metal collection drives, setting precedents for public service in the BSA that have come down all the way to our own times. During the Depression, as part of the New Deal, the Civilian Conservation Corps, Public Works Administration, and Works Progress Administration put young people to work at various useful public tasks, and pioneered recruitment efforts that later became useful during the mobilization for the Second World War. Americorps and the Peace Corps, in the late 1960s, were not only designed to give young people service opportunities, but to create breeding grounds for new modern leaders—which, of course, both did. America’s national service programs today are insufficiently mobilized due to lack of public interest—but with a little reform and rethinking and a lot of crisis-era recruitment, we could bring them back up to speed and ready to mobilize in the environmental crises Americans will certainly continue to face moving forward.