Coronavirus Challenge: Inside the Pentagon's Struggle To Protect Supply Chains 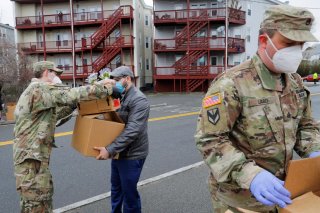 The coronavirus is causing disruption across all sectors of the economy, and the defense industrial base is no exception.

To minimize the impact on military readiness, the Department of Defense is trying to mitigate threats to the supply chains that feed the defense industry—whether those sources are in the U.S. or overseas.

The defense industrial base is a sophisticated ecosystem, with many tiers of suppliers. The system is so complex because the products it creates are complex.

One of the most exquisite examples of that complexity is an F-35 fighter jet, with more than 300,000 individual parts from more than 1,400 suppliers located in 48 states, Puerto Rico, and seven partner countries.

The complexity becomes a vulnerability in a pandemic. If one supplier is temporarily forced to shut down production or is permanently forced out of business, the impact ripples through the supply chain and causes delays to major acquisition programs, whether it’s the F-35 or the Ford-class aircraft carrier.

The Department of Defense has been aware of this vulnerability throughout the COVID-19 crisis and immediately took steps to address it.

It started by designating the defense industrial base—including all its suppliers, not just its prime contractors, such as Lockheed Martin and General Dynamics—as critical infrastructure.

But the virus has forced some suppliers to halt operations despite their critical-infrastructure designation. In some cases, the virus has caused workers to remain home, either because of sickness or over a concern about catching it.

Many suppliers are small businesses that cannot afford to stop work for weeks or months. To address those cash-flow issues, the Pentagon announced on March 20 it would increase progress payments to prime contractors by $3 billion with the expectation that the prime contractors would pass those funds along down their supply chains.

Progress payments ordinarily are made monthly to contractors for costs and work performed for a contract. The payments are made as a percentage of the total cost, with the balance to be paid when the contract is completed. The rate is typically 80%, but has been raised to 90% for large businesses and 95% for small businesses.

Lockheed Martin and Boeing have already announced plans to flow those funds to their suppliers.

Domestic suppliers are not the only issue for the defense industrial base, however. International suppliers are just as vital to American defense acquisition programs, and the Pentagon has far less influence over their ability to continue production.

Mexico has not exempted its defense industry from stay-at-home orders, causing delays for U.S. programs (particularly in aerospace) that rely on Mexican components.

Undersecretary of Defense for Acquisition and Sustainment Ellen Lord said on Monday she was writing a letter to Mexican Foreign Affairs Minister Marcelo Ebrard to ask that he help reopen key suppliers.

Similarly, there are concerns that COVID-19’s impact on the F-35’s globalized supply chain will cause delays to the program. Air Force Chief of Staff Gen. David Goldfein says he expects delays in the F-35 program due to the virus, and he is already working with his counterparts in the program’s partner countries to mitigate supply chain risks.

“We’ve started a robust discussion with the international air chiefs,” Goldfein said on Wednesday, adding he had already spoken to the chiefs of staff of the Italian and Canadian air forces.

He’s not solely concerned with keeping suppliers open as critical infrastructure. Rather, he wants to work with allies to consider the question, “How do we collaborate and ensure that the tier-two and tier-three suppliers remain healthy through this COVID period, so that we have a healthy industrial base at the back end of it?”

The coronavirus pandemic’s impact on the supply chain likely will have a small positive side effect; namely, improving the Department of Defense’s supply-chain visibility and making that knowledge a higher priority in the future.

Lord was asked in her press briefing Monday what the Pentagon has learned about its visibility—or lack thereof—into its supply chains and how she would like to change that. She said her team has been “focusing on supply chain illumination tools in the last couple of weeks.”

No doubt those tools will benefit the Pentagon far beyond the coronavirus pandemic.

This article by Maiya Clark first appeared in The Daily Signal on April 27, 2020.