The Coronavirus Comes for Ukraine 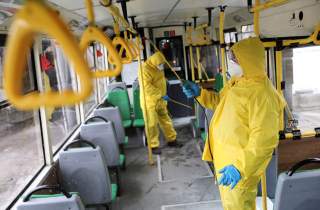 KYIV, Ukraine—Ukraine has so far been spared from a major coronavirus outbreak. The country’s economy, however, is far less quarantined from the disease’s global impact.

Responsible for the disease now known as COVID-19, the new coronavirus originated in Wuhan, China. According to the World Health Organization, the global number of infected people is now over 100,000. The outbreak has sparked economic uncertainty around the world. Markets are in turmoil, in part because of mounting fears of a global recession.

That’s particularly bad news for Ukraine’s economy, still recovering from the body blow of Russia’s 2014 invasions of Crimea and the Donbas and in desperate need of  foreign loans to float government spending through an acute revenue shortfall.

Speaking to Ukraine’s parliament Friday, Ukrainian President Volodymyr Zelenskyy said Ukraine’s economy was “accelerating, but then stumbled and risks falling face down on the ground.”

“The industrial glory of Ukraine is gradually becoming a matter of the past,” Zelenskyy said.

So far this year, Ukraine’s government revenue has fallen far short of expectations. In January, that number was 25% lower than what was projected when lawmakers crafted the nation’s 2020 budget. In February, revenue was 5% less than expected.

Altogether, Ukraine’s government coffers are currently short about $642 million in revenue. Meanwhile, foreign loans are harder to come by as the economic aftershocks of the coronavirus outbreak ripple across the globe.

That leaves Kyiv short of cash and with fewer available loan sources. And, according to the International Monetary Fund, the global economic picture may not improve anytime soon.

“What we can say for certain is we have moved into the territory of more dire scenarios … as long as we don’t know the duration of this [coronavirus] outbreak, we’ll be in a higher uncertainty space,” Kristalina Georgieva, the International Monetary Fund’s managing director, said last Wednesday.

According to Bloomberg, the coronavirus outbreak could cause the world’s gross domestic product to decrease by about 3% this year—representing a loss of some $2.7 trillion. A drop in oil prices sent world markets into further turmoil Monday, sparking a sell-off on Wall Street.

In fact, the global economic dip already is being felt in Ukraine. Following months of slow but sustained growth, Ukraine’s gross domestic product dropped by 0.5% in January, according to government data.

And for the first time in a year, Ukraine’s Finance Ministry will cancel its weekly government bond auction, which was scheduled for Tuesday.

“We can already see the first signals that the Chinese economy is slowing down due to the coronavirus, and of course this affects the economy of China’s trading partners,” said Oleksiy Goncharenko, a member of Ukraine’s parliament.

Ukraine’s gross domestic product topped out at $183 billion in 2013. By 2015, it had dropped by about half that number. At the same time, Ukraine’s national currency, the hryvnia, plummeted in value and inflation correspondingly spiked.

Some analysts say Ukraine needs to notch annual GDP growth rates of about 8% for the average citizen to see any noticeable quality of life improvements.

As of Monday, Ukraine had only one verified case of coronavirus.

The next day, the Ukrainian Ministry of Health announced that six more people were being tested for suspected coronavirus infections—however, none tested positive.

In the event of a large-scale outbreak, Ukraine has plans to ban mass events and temporarily suspend schools. Ukraine International Airlines, the country’s flag carrier, suspended flights to China on Feb. 4, following the lead of many other air carriers.

So far in Kyiv, there hasn’t been a run on supplies at supermarkets, and it’s still relatively rare to see people on the streets wearing face masks. A parade Sunday for International Women’s Day went ahead as scheduled.

Some say that Ukraine’s economy also is sufficiently quarantined to weather China’s economic downturn without permanent damage. The future of the Sino-Ukrainian trade relationship is not yet in jeopardy,

“Ukraine is not so integrated into China’s production cycles. We mainly import finished products. Therefore, some Chinese-dependent businesses will feel the negative consequences, but it won’t be catastrophic for the Ukrainian economy,” Goncharenko, the Ukrainian member of parliament, told The Daily Signal.

Taras Kuzio, a political science professor at the National University of Kyiv-Mohyla Academy, said Ukraine was not likely to rethink its economic ties to China. Rather, he said the coronavirus scare likely would be nothing more than a “minor blip” in the Ukraine-China economic relationship.

The bottom line, Kuzio said, is that the Russian military threat to Ukraine trumps all other concerns—including the coronavirus.

“In the former USSR, especially in Ukraine, China is a strategically important alternative to Russia,” Kuzio told The Daily Signal. “The direction of change in the orientation of Ukrainian exports from Russia … to China and the EU will, I believe, continue to retain its momentum, excepting minor blips.”

Ukraine has replaced the U.S. as China’s top supplier of corn. And China is now the top purchaser of Ukrainian military arms, according to data from the Stockholm International Peace Research Institute.

Over the past five years, Beijing has ramped up its investments in Ukraine to prepare the nation’s transportation infrastructure for its role as a portal into Europe for China’s proposed One Belt, One Road overland trade route across Asia.

According to recent data, Ukraine maintains a $5 billion trade deficit with China. However, fallout from the coronavirus may scale back Ukraine’s imports from China this year, said Iryna Fedets, a senior research fellow at the Institute for Economic Research and Policy Consulting, a Ukrainian think tank.

“The volume of imports from China to Ukraine will probably decrease in 2020. But not because of lesser demand … the high demand will likely face reduced supply because of Chinese industry slowing down during the coronavirus outbreak,” Fedets told The Daily Signal.

“Ukrainian entrepreneurs may put their launch and growth plans on hold, as China-made machinery and equipment is widely used by local businesses,” Fedets said, adding that higher shipping costs due to the coronavirus outbreak may also hurt Ukraine’s trade with China.

After almost six years of constant combat, the war in Ukraine is ongoing and frozen along a static, 250-mile-long, entrenched front line. So far, the conflict has killed more than 13,000 Ukrainians.

And with 1.7 million who fled their homes due to the violence, Europe’s only ongoing land war is also the Continent’s biggest humanitarian crisis.

Moscow wants to weaken Ukraine economically and politically to forestall the country’s Western pivot; particularly, the Kremlin wants to derail any aspirations Ukraine has of one day joining the European Union or NATO.

Despite the war, Ukraine remains entrenched in its pro-Western pivot. The country also has undergone a top-to-bottom political, economic, and cultural divorce from Moscow. That rupture sent Kyiv looking for new markets in which to sell its goods, as well as new foreign investors to jump-start its economy.

China has had its economic sights set on Ukraine since 2011. That year, under the watch of Viktor Yanukovych—Ukraine’s now-deposed, pro-Russian president—the two countries established a long-term strategic partnership in economic ties and trade. In 2012, China supplied Ukraine with $3 billion in agricultural loans.

In December 2013, Yanukovych met with Xi in Beijing. Both sides recommitted to their strategic partnership. The following February, Yanukovych was ousted in Ukraine’s pro-Western “Revolution of Dignity.”

Yet, the momentum of tightening Sino-Ukrainian ties that Yanukovych set in motion has continued unabated by the successive post-revolutionary presidencies of Petro Poroshenko and Zelenskyy.

“China can offer [profits] without the threat of the loss of sovereignty, which many fear exists in trade with Russia—and that will continue to make China a lucrative trading partner,” Kuzio said.

Beijing ultimately wants Ukraine to become a stable, reliable partner through which Chinese goods can flow into Europe. Goncharenko, the Ukrainian member of parliament, said the current economic turmoil will not scuttle Ukraine’s pivotal role in Beijing’s showcase economic initiative.

“The coronavirus will not be able to interrupt the restoration of the Silk Road,” Goncharenko told The Daily Signal. “Ukraine plays an important transit role in this project and … this is why we are interested in overcoming the coronavirus crisis as soon as possible.”

This article by Nolan Peterson first appeared at The Daily Signal on March 9.