Coronavirus Is Coming for Russia 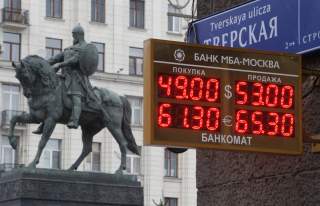 As elsewhere, Russia's stock markets have suffered and the ruble has continued to weaken. Low oil prices meanwhile threaten the sustainability of Russia's government budget. While Russia currently has substantial reserves that will allow it to weather immediate budget shortfalls, some anticipated sources of government spending may become unavailable. Meanwhile, Russia's economy may stall out and possibly even see a contraction in GDP, while rising inflation will further suppress the already-dwindling purchasing power of Russia's population.

Despite the potential effects this crisis could have on Russia's economy, the government's response in terms of economic stimulus measures and direct intervention has remained relatively limited. Many adjustments to a world of oil prices well below the $42.20 budgeted price trigger automatically, but these will only help soften the macroeconomic blow since they do not provide economic stimulus beyond the regular budget. When oil prices drop below the level budgeted by the federal government, foreign currency reserves are automatically applied to cover shortfalls. The central bank will thus sell foreign currency for rubles to cover the shortfall in government revenue from oil prices below $42.20. With over $450 billion in foreign exchange reserves, Russia can easily weather the current oil prices of around $30 for another five years without depleting its reserves, but even pessimists don't expect oil prices to remain that low for that long.

Lost oil revenues might be tougher on Russia's regions. According to estimates, a majority of its regions could need to spend their entire reserves (a total of about $20 billion across regional administrations, with half held by the Moscow region and the balance by the other regions) during 2020 to make up for revenue shortfalls and the weak ruble. Even then, many would still have to take out significant commercial loans, or receive subsidies from the already-strained federal budget. These estimates are also based on a recovery of oil prices in the second half of 2020. If such a recovery does not occur, regional administrations could face an even worse situation, possibly requiring a significant bailout from the federal government if their debt burdens become unsurmountable.

While Russia continues to emphasize that its reserves are sufficient to cover the shortfall in budget revenue, a politically critical part of the budget for the coming years could, however, become inaccessible at current oil prices. In order to pay for the social spending plan that Putin announced Jan. 15, the Russian government was counting on a special budgetary maneuver to pad the federal budget with funds from the National Wealth Fund. While the government can't directly tap its wealth fund, it planned to have the Central Bank sell its majority share in Sberbank to the National Wealth Fund — a legitimate investment for the fund — and to pay a portion of the profits from the sale into the federal budget.

For this sale to take place, however, the National Wealth Fund would need to grow by a significant degree in order to reach the required liquidity to afford the sale. The generation of liquidity in the National Wealth Fund, however, is done by skimming oil profits over an indexed value. This year, the fund will not produce any profits to skim when oil prices are below $41.60. With wealth fund liquidity insufficient to purchase the first tranche of the Sberbank sale despite the declining value of Sberbank shares, the sale has been postponed from June to December, and if oil prices haven't recovered by then, will be postponed even further.

Another major element of financing for this social spending was the rerouting of funds destined for the Pension Fund. This was possible at the beginning of the year, since the Pension Fund itself had been more profitable than expected. But as overall economic performance in Russia dwindles, so will the profitability of Pension Fund assets. This means Russia might not be able to redirect money initially destined for it without weakening the fund significantly.

The issues at the Wealth and Pension funds ultimately mean that the federal budget may not be able to meet Putin's social spending goals, or that meeting them may require cutting other planned budget expenses.

In its response to low oil prices, Russia's government has adjusted its expectations for budget revenue and inflation for 2020. It still, however, insists that all of its goals for new social spending and its growth target of 1.9 percent will be maintained. Analysts at the Accounts Chamber, the Russian parliament's public auditor, are less sanguine, and warn that Russia could face zero growth or even recession as poverty increases. The Accounts Chamber typically has a less optimistic outlook than the government, and its takes tend to be closer to reality. In this case, many other Russian financial analysts are backing the Accounts Chambers' stance. Even worse, some of those financial analysts anticipate that if oil prices don't bounce back during the year and result in an annual average of over $40, Russia could even see inflation rise to over 7 percent and enter a recession with a GDP contraction of over 1.5 percent.

As inflation — initially forecast at 2.2 percent for this year, but now expected to reach at least 4 percent during 2020 — goes up, this also means that the cost of consumer goods will rise in Russia. But wages, which never recovered from their contraction during the 2015-2017 crisis, will not be growing in sync with these price rises. Putin has requested that the government and Central Bank do whatever they can to shield the population from the effects of this crisis, but their means are limited. The State Duma has continued to proceed with legislation related to its social spending package, but without adjustments, whether it can proceed remains uncertain. Dwindling purchasing power had already become a controversial political issue in Russia last year, and the current crisis will only make matters worse.

This increases the potential for political unrest, and could sap the government's popularity ahead of the April 22 popular vote on constitutional amendments and ahead of next year's Duma elections. United Russia's control over parliament or the passing of a new constitution wouldn't immediately be at risk. But as a poor economic situation increases support for more potent opposition parties, these parties could enter the parliament and carve out a sustainable — if small — presence within Russia's political institutions. These parties' ability to compete with United Russia will be greater in regional gubernatorial and legislative elections in September 2020. The Kremlin will likely block most real opposition candidates from taking part in the latter elections, something it has done before. But even so, growing economic malaise could help reignite large waves of pro-democracy protests in the run-up to these elections.

Russia's Economy Faces Stormy Seas Despite Moscow's Optimistic Forecast is republished with the permission of Stratfor Worldview, a geopolitical intelligence and advisory firm.