Coronavirus Could Flatten the Curve of China’s Rise 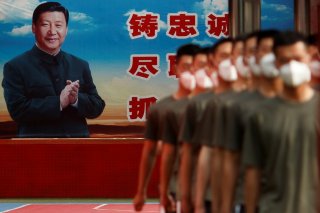 After half a century of remarkable growth, China’s ascent toward great-power status could prove to be a casualty of the coronavirus pandemic. The pandemic presented an opportunity for China to demonstrate it could be a responsible, leading global power. Thus far, it has failed.

Diplomatically, China finds itself in a significantly more hostile global landscape than it did prior to the crisis. This stems in large part from China’s missteps and suppression of information in the early stages of the crisis, and its bungled attempts to deflect blame and assert its influence abroad.

Indeed, the virus was likely identified in China in early December, yet Chinese officials reprimanded doctors for discussing the new virus and ordered samples of it destroyed. By the time Chinese officials instituted rigorous movement restrictions in Wuhan, the original epicenter, millions of people had left the city.

To cover its errors, China launched a full-scale propaganda campaign to distract from its irresponsible behavior, even suggesting the United States unleashed the virus on the world. The primary effect of this campaign was not convincing the world of its innocence, but sharpening American resolve that China is an adversary that must be confronted.

In fact, China’s blunders and subsequent propaganda campaign have led to a rare case of bipartisan consensus in the United States: most Republicans and Democrats agree that America needs to be tough on China, that Chinese authorities cannot be trusted, and that China is responsible for the pandemic. The United States, with its capability of amassing a vast reserve of hard and soft power, is especially dangerous to autocratic adversaries when it is not bogged down in gridlock.

Outside the United States, China’s attempts to improve its image have similarly faltered. In Europe, much of the medical equipment provided by China has proven faulty. The Netherlands, for example, recalled hundreds of thousands of facemasks it received from China. Spain, meanwhile, recently canceled an order of defective test kits—the second time they received flawed kits from China.

Recently, after Australia called for an inquiry into the virus’s origins, China’s state media claimed Australia was “gum stuck to the bottom of China’s shoe.” Chinese officials suggested Australia was jeopardizing its trade relationship with China, with its ambassador saying, “Maybe the ordinary people will say, ‘Why should we drink Australian wine? Eat Australian beef?’” Perhaps instead of the “Wolf Warrior” label, this is more accurately called the Don Corleone school of diplomacy.

China has raised the ire of other close partners of the United States. The Chinese embassy in Berlin got into a public spat with the German newspaper Bild after it called for billions of dollars from China in compensation to Germany. Chinese diplomats also accused France of intentionally letting older residents die in nursing homes, prompting reprimands from French officials.

Rising xenophobia in China has damaged relations with African countries, particularly after reports emerged of African residents of the Chinese city of Guangzhou being targeted for eviction amid the pandemic. African officials have publicly rebuked China for these and similar actions.

In the realm of diplomacy, rather than living up to the moment, China has been acting out on the world stage and it is witnessing the negative consequences. A report by a Chinese think tank connected to the Ministry of State Security, the country’s foremost intelligence body, and reportedly seen by President Xi Jinping, warns that anti-Chinese sentiment is at a global high not seen since the country suppressed protests in Tiananmen Square in 1989.

Moreover, China’s troubles are not limited to diplomacy. Its economy contracted for the first time in half a century, shrinking by 6.8 percent in the first quarter of 2020. Retail sales and industrial output declined significantly compared to the same period last year, while unemployment grew. Even with stimulus measures, economic growth for the year is likely to be sluggish.

Lethargic growth could pose problems for the country’s political stability. The Chinese Communist Party’s governance model relies on fostering economic expansion and steadily increasing living standards to mitigate any broad challenge to its political authority. Should domestic turmoil arise from the downturn, China’s ability to project power overseas could also be limited.

Several months into the pandemic, China finds itself with declining soft power, a battered economy, and a generally more inhospitable global environment. It has, in short, failed the leadership test presented by the pandemic and its quest to be a leading global power could wind up dead-before-arrival.

Having failed the diplomatic test, the next question will be whether China’s economy can bounce back quicker than the United States and its allies, thereby putting it in a stronger position to become the lynchpin of a global economic recovery. But leading a global recovery will also require China to demonstrate leadership abroad, which China has shown it is ill-prepared to handle.

Jeffrey Cimmino is a program assistant in the Global Strategy Initiative in the Scowcroft Center for Strategy and Security at the Atlantic Council. His writing has appeared in the National Interest, National Review, the Washington Free Beacon, the Washington Examiner, Spectator USA, and other publications.