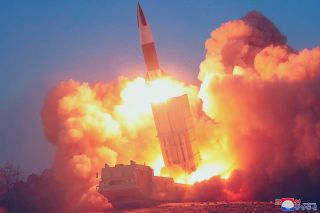 According to North Korean authorities, North Korea has not yet suffered any cases of COVID-19. That is very surprising given that North Korea is a neighbor and extensive trading partner of China, where the disease initially flourished.

To avoid COVID-19, the North has imposed draconian controls on border crossings, flights, and ship arrivals into the North. And it rapidly quarantined all foreigners in North Korea.

Some of the first reports of COVID-19 infections in North Korea started in early February. Within days, there were reports of deaths in North Korea that resulted from illness strongly resembling COVID-19. A few days later reports indicated that at least one North Korean had died of what appeared to be COVID-19 in Pyongyang in late-January. She was cremated by authorities who were apparently attempting to prevent disease spread. Several more deaths reportedly occurred in Pyongyang soon thereafter. Plus some eighteen people with COVID-19 symptoms were in isolation in a Pyongyang hospital.

At about the same time, the North Korean military smuggled in a large number of South Korean face masks. These were distributed to military bases and hospitals in the Pyongyang area. North Koreans on the Chinese border were also buying whatever masks they could find. Masks probably would not have been needed unless a disease of some form—most likely COVID-19—was already present in the area and spreading. By the end of February, very senior North Korean leaders were each being provided with large numbers of masks, and Russia provided the North with rapid COVID-19 diagnostic kits.

On February 20, North Korea reportedly closed schools throughout the country, another measure that probably would not be needed unless a contagious disease was already spreading in the country.

And while denying that it has any COVID-19 cases, the North has been privately asking for medical aid for dealing with COVID-19 from various countries or international organizations. No wonder: a source reports that, “the virus has spread widely in Pyongyang and the border town of Sinuiju, North Pyongan Province. ‘The situation is so desperate that it is just a matter of dying from starvation or infection.’”

But most interesting, Kim reportedly disappeared from public view for around three weeks at the beginning of February. And then starting in late-February he left Pyongyang and went to the east coast to lead artillery and missile training for several weeks, probably trying to avoid COVID-19 exposure in Pyongyang.

So if even only part of these stories are true, it would appear that North Korea may have a serious COVID-19 outbreak. The magnitude can be measured by that March 9 report of almost 200 soldiers having died. Most North Korean soldiers are 17-39 years of age, suggesting that perhaps most of those infected and dying are in that cohort as well. For that age, the COVID-19 death rate of otherwise healthy people is about 0.2%. Of course, North Korean soldiers don’t eat very well and are not very healthy, so let’s say their death rate is 2%. With 200 dead, that might imply 10,000 coronavirus cases among the North Korean military as of March 9. Even if the military had gained pretty good control of this spread (which is doubtful), the cases would likely have expanded at least 5 percent per day, to over 20,000 cases today.

Kim is also likely worried about his regime’s control. He has been suffering many failures, including the Hanoi Summit with President Trump and continuing U.S. and UN sanctions that have made life in North Korea even more difficult than normal. Do not forget that Kim has been unable to get sanctions relief despite his promises to do so before each of the roughly dozen summit meetings he has held the last two years. Furthermore, Kim may perceive a need to continue purging senior elites despite how their families and friends are likely reacting. And now, he suffers from a major pandemic that he is not able to control an—in fact—has apparently run away from, leaving his elites in Pyongyang, an apparent COVID-19 hot spot. Kim does not look like the god he claims to be in his regime’s indoctrinations.

So there is no surprise that he has been launching missile tests, trying to divert the attention of everyone, especially his elites.

We are not predicting a collapse of the North Korean regime. But we have to believe that Kim is worried, given the paranoia he has displayed in the past—for example in killing his older brother with a banned chemical warfare agent.

And so we also need to worry. It’s not unthinkable that Kim could decide to take even more extreme actions than missile launches to demonstrate that he is still the all powerful leader of North Korea.

Bruce W. Bennett is a senior defense analyst at the nonprofit, nonpartisan RAND Corporation. Diana Y. Myers is a student in the Pardee RAND Graduate School and a U.S. Air Force 2nd lieutenant. Disclaimer: The views and opinions expressed in this article are those of the authors and do not necessarily reflect the official policy or position of any agency of the U.S. government.