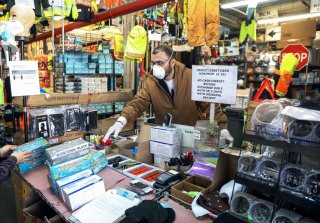 The Trump Administration is reportedly considering an executive order to restrict federal agencies from purchasing foreign medical supplies and equipment. That would be a mistake. As a general matter—and, especially during a pandemic—the White House should avoid measures that impede Americans’ access to affordable, quality medical supplies.

Discriminatory government procurement laws are part of the disastrous trade policy legacy of President Herbert Hoover, who signed into law, on his last full day in office, the Buy American Act in 1933. This law was intended to compel the U.S. government to procure American‐​made goods, in an era when federal government expenditures were expanding dramatically. Of course, restricting the supply of goods and services available for government acquisition only ensured (and still does ensure) that taxpayers got the smallest bang for their buck. It also made it harder (and still does) for U.S. suppliers to compete abroad, as foreign governments adopted similar measures.

Although tariffs and other trade barriers were reduced considerably over the decades from their Hoover‐​era peaks, discrimination against foreign goods through “Buy America” and other protectionist procurement rules continued. Some international trade rules restraining these kinds of practices emerged over the years, but they were riddled with exceptions. Today, these rules are the shiny object catching the attention of an administration that considers imports a cost, trade a zero‐​sum game, and walls preferable to bridges.

These discriminatory procurement provisions are always a problem, but today the stakes are even higher. The public health crisis is bringing the economy to its knees. Supply shortages abound. And demand for goods and services has plummeted amid widespread social distancing.

Advocates of “Buy American” provisions and American “self‐​sufficiency,” more broadly, invoke a noble purpose: To decouple America from its reliance on China, which presents some vaguely defined national security threat. Reportssuggest that the prospective executive order picks up on this theme, noting that the president would designate active pharmaceutical ingredients as “critical technology,” necessary for national security.

But if diversifying away from China (which, for some products, may be prudent from a national security perspective) is the objective, it is hard to justify the collateral damage that Buy American provisions would cause. Buy American means forgoing purchases from all other countries, not just China.

In a report detailing pharmaceutical drug shortages even before the pandemic, the FDA noted that only 8 percent of FDA‐​approved finished dosage form (FDF) manufacturing sites and 14 percent of active pharmaceutical ingredients (API) sites were located in China in 2018. Comparatively, the United States was home to 37 percent and 12 percent of the world’s FDF and API facilities, respectively. In other words, restricting U.S. government acquisitions to U.S.-manufactured pharmaceuticals would put 55 percent of the world’s FDA‐​approved FDF sites and 74 percent of its API facilities off limits. That outcome risks severe supply shortages and very high prices for finished pharmaceutical medications—two scourges the administration should be trying to subdue.

Meanwhile, a review of the Census Bureau’s import statistics suggests that the argument that Americans are too reliant on China for pharmaceuticals and their ingredients is greatly exaggerated. In 2019, the United States imported $132 billion of products classified in the Harmonized Tariff Schedule of the United States (HTS) as “Pharmaceuticals” (Chapter 30). Of that $132 billion, only $1.6 billion (or 1.2%) came from China. As for the chemical ingredients in pharmaceutical products—most of which are classified in Chapter 29 of the HTS under “Organic Chemicals”—U.S. imports amounted to $49.2 billion in 2019, of which China accounted for $7.7 billion, or 15.6 percent. Granted, there may be some specific products or ingredients where China accounts for a more significant share of U.S. imports, but broad Buy American restrictions would be akin to using a sledgehammer to do a scalpel’s job.

“Buy American” provisions also generate other costs. On top of the economic disruptions, protectionist procurement rules would risk further damage to already frayed U.S. relationships with other countries at a time when we should be working together to contain the pandemic and its economic costs. This could further erode America’s sullied reputation and further impede the next president’s efforts to reestablish trust and reassert U.S. global leadership.

There is still time to avoid this outcome. President Trump should note that trade is doing some great things to help fight the pandemic, that it would be wise to forego a Buy American executive order, and that he should heed the advice of other advisers and Senate Finance Committee Republicans. Too much is at stake.