Coronavirus Has Taken A Toll On China's Military 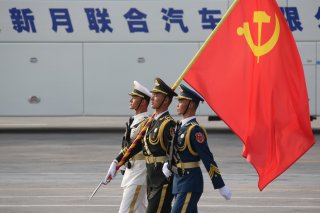 Here's What You Need To Remember:  It suggests that China’s military industry’s supply chain is relatively insulated from that used to supply the factories that produce goods for export.

The disruption that COVID-2019 coronavirus has inflicted on China’s industry is well documented. Wuhan, a major industrial center, is still in lockdown as of early March 2020. Many factories have gone to a standstill, with major effects on the supply of goods around the world. However, less talked about is the effect the coronavirus has had on the Chinese military industry. While this is understandable, given how China has restricted information about the coronavirus’s effects and the general opacity of the Chinese military industry, some information has come out.

Evidently the effect on the military industry is waning, as announcements of resumption of production of certain items have come out. On February 21, Shenyang Aircraft Corporation announced that it was resuming production of J-15 fighters after a short pause due to coronavirus fears. This follows announcements earlier that other aviation industry firms had resumed full production. Measures against further coronavirus infections were also included in speeches in which productions were resumed, including regular temperature checks among the workforce. In other sectors, such as shipbuilding, major efforts have taken place to resume full pace production, including the use of reserve manpower to replace those who are sick.

However, there remains the issue of Wuhan, which is still on lockdown. Wuhan houses many firms related to the Chinese defense industry, being part of China’s “Optics Valley” dedicated to electro-optical equipment. Despite not being on the coast, Wuhan also hosts many naval engineering firms and institutes. Statements by Chinese analysts suggest that work is being minimally affected, as none of the staff at military-related institutions at Wuhan are said to be infected. But there is the admission that there could be an impact on productivity as well as security risks as the number of workers working from home with sensitive information increases.

The implications of the minimal impact, if true, are interesting. It suggests that China’s military industry’s supply chain is relatively insulated from that used to supply the factories that produce goods for export. Articles discussing the start of Wuhan’s civilian industry are not optimistic, saying materials may run out as other sectors of the Chinese economy remain disrupted. Chinese authorities appear to be aware of this, and have initiated pushes to restart production from the bottom up in military industries. A quote provided to the South China Morning Post reinforces this: “Other state-owned enterprises like steel plants have also resumed production, and it’s impossible for the aircraft and naval industry to slow up production once the heat treating furnaces are turned on,”

Whether the return to norms in the military industry will boost the rest of China’s economy has yet to be seen. But their relative insulation from the original shocks of coronavirus suggest that while they may be quicker to recover, their recovery will be isolated.

Charlie Gao studied political and computer science at Grinnell College and is a frequent commentator on defense and national security issues. This article first appeared in March, 2020 and is being republished due to reader interest.