The Coronavirus Helps Weak European Governments Keep Power—but How Long Will They Last? 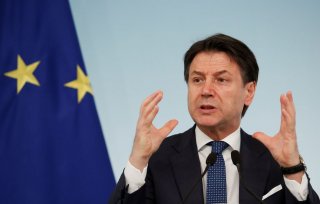 The coronavirus outbreak is ravaging Europe’s economy by simultaneously bringing production, consumption, investment and trade to a near halt. But the pandemic is also helping freeze the Continent's political crises by forcing governments to unite against the escalating existential threat. Europe's political tumult, however, will return once the immediate contagion has abated. And several countries, in particular, will see a combination of financial and legislative fragility that will limit their ability to deal with the enduring economic repercussions.

Several EU countries started the year with minority governments, caretaker administrations or unstable coalitions that the coronavirus crisis has since made much more resilient:

Before COVID-19 was detected in Italy, tensions between the country's coalition partners — the anti-establishment Five Star Movement and the center-left Democratic Party — were on the rise over issues such as the annual budget and reforms of the criminal justice system. Poor results in regional elections and the defection of several lawmakers to opposition parties had also further weakened the government. Prior to the outbreak, opinion polls had suggested the Euroskeptic League party could win if an early election was called, and would form a government with like-minded parties. A government led by the League would make investors nervous about Italy’s membership in the euro, adding political and economic uncertainty to Italy’s future.

The escalation of coronavirus cases and the drastic measures that followed, however, have since temporarily suspended Italy's political crisis. The March 29 referendum on a constitutional reform to reduce the number of lawmakers in the Italian Parliament has also been indefinitely postponed due to the COVID-19 crisis. Italy will probably not hold an early general election before the referendum takes place because of the complications related to electing members of parliament before the reduction in the number of lawmakers is enforced.

Germany's coalition government between the center-right Christian Democratic Union (CDU), the Christian Social Union and the center-left Social Democratic Party was also on the verge of collapse at the start of 2020. The partners have different views on fiscal policy, and were also trying to differentiate themselves in the eyes of voters after governing together for the majority of the past 20 years. Their poor performance in regional elections in late 2019 and early 2020 led to internal debates over whether to put an end to the coalition and hold an early general election.

But the arrival of COVID-19 has since put the coalition's crisis on pause. After months of virtual paralysis, the German government swiftly closed the country’s borders, announced tax benefits for companies and households, and offered government-backed loans to businesses. The outbreak also postponed the CDU’s plans to appoint a new leader. A party congress that was scheduled for April 25 has been suspended, and the new date has yet to be announced. The new CDU leader stands a decent chance of winning a general election and becoming the new chancellor after Angela Merkel's term ends in 2021. He or she will also have to decide whether to continue with Angela Merkel’s centrist approach, or to move to more right-wing positions to stop the party's continued hemorrhage of voters to the far-right Alternative for Germany party. But without a leader, the CDU will not be interested in exiting the government coalition and holding an early general election.

In mid-March, the COVID-19 crisis convinced nine political parties in Belgium's parliament to put their ideological differences aside and formally support Prime Minister Sophie Wilmes’s caretaker government, which had been operating with limited powers since October. This formal support for Wilmes has granted her government full powers to pass emergency measures to cope with the outbreak. But while the coronavirus gave Belgium its first fully-fledged government since the inconclusive general election of May of 2019, the parties have only given their support to Wilmes for six months, after which she will have to ask for the confidence of parliament again in mid-September. If the worst part of the health crisis is over by then, the prime minister may struggle to win that vote and her government may in turn collapse, leading to renewed political turbulence in Belgium.

When the coronavirus crisis hit Romania, the country was struggling to find a new prime minister. Prime Minister Ludovic Orban of the center-right National Liberal Party was in power only in a caretaker role after losing a no-confidence motion in early February. Parliament was unable to appoint a successor, opening the door for a potential early general election. But after the COVID-19 outbreak took hold in early March, the Romanian parliament formally re-appointed Orban as prime minister, with support from some of the opposition lawmakers that voted to oust him just a month before. Shortly after his reappointment, Orban announced a stimulus package including cheap loans to companies and state support for workers who were suspended because of the pandemic.

Having stable governments in Europe is beneficial at a time when the Continent is feeling the immediate economic blow of the coronavirus outbreak. When governments do not have to deal with internal disputes and are united toward a common goal, they are in a better position to make decisions to mitigate the economic effects of crises, such as the current health emergency. But this new phase of political stability may not survive long after the danger has passed, as the sense of urgency that brought political adversaries together will be gone. And as a result, the governments that were fragile before the outbreak will see their disagreements resurface.

In addition, there will be a lag between the drop in contagion cases and the recovery of the economy. The eventual relaxation of quarantine measures will allow the services and industrial sectors to resume their activities as people are allowed to leave their homes and production and consumption gain traction again. The problem is that many businesses will not survive the crisis, and some of the workers that were suspended during the peak of contagion will not get their jobs back. Europe’s largest economies — including Germany, France and Italy — were already cooling down before the COVID-19 outbreak, meaning that the Continent's post-virus recovery will likely be slow and uneven.

To make things more complicated, slow economic growth, higher unemployment and fragile governments will coincide with the financial problems created by the policy reaction to the outbreak. Countries such as Italy, France, Germany and Spain have announced large packages of stimulus measures (including cheap loans for companies, assistance for self-employed workers and delays in tax payments) that will partially be financed by taking on additional debt. In a context of low growth, this decision will deepen their deficits and widen their debt-to-GDP ratios, which could make financial markets once more worry about whether this is sustainable.

Political instability will thus return to many European countries at a time when their economies are still reeling from the aftermath of the COVID-19 crisis. This will reduce the room for many governments to introduce structural reforms to deal with the growth problems that predated the pandemic. Meanwhile, the prospect of early general elections in large countries such as Italy and Germany will also result in households and investors postponing some of their spending and investment decisions amid the reemerging political uncertainty. This means that Europe will feel the consequences of the coronavirus outbreak long after the outbreak is put under control.

In Europe, COVID-19 Extends the Tenure of Fragile Governments is republished with the permission of Stratfor Worldview, a geopolitical intelligence and advisory firm.