Coronavirus: How Past Experience With Epidemics Is Shaping Muslim Pilgrimages 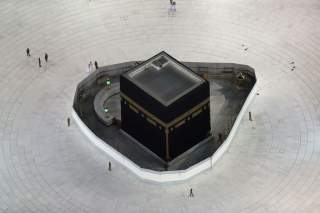 Due to concerns over the global spread of the coronavirus – especially in nearby Iran – Saudi Arabia has temporarily suspended travel to its holy sites. Millions of Muslims visit the Saudi kingdom around the year for pilgrimage.

The current travel restrictions prevent the entry of both overseas pilgrims and Saudi citizens into the holy cities of Mecca and Medina. This has had a direct impact on the umrah pilgrimage, known as the “lesser pilgrimage,” that can be performed at almost any time of the year.

Whether or not the restrictions will extend to the hajj, which begins around July 28, can be known only after it becomes clear how long the coronavirus outbreak will last.

Both the umrah and hajj are important pilgrimages for Muslims, but they differ in many respects.

When do Muslims undertake umrah?

Millions of pilgrims undertake these pilgrimages. In 2019, for example, Mecca welcomed over 7 million international pilgrims for umrah in addition to millions from within the kingdom. The number of hajj pilgrims for the same year was over 2 million.

As a scholar of global Islam, I listen to stories of people from around the world who performed these pilgrimages.

Muslims believe Prophet Muhammad performed both the umrah and the hajj. Muslims have been following this tradition for the last 1,400 years. The pilgrimages retrace events from the lives of Ibrahim, Hajar, Ismail and Muhammad.

While the hajj is a once-in-a-lifetime obligation, compulsory for all Muslims according to their finances and physical ability, umrah is voluntary.

According to certain hadiths, the recorded traditions and sayings of the Prophet Muhammad, both pilgrimages offer the forgiveness of sin.

Umrah and hajj also differ in duty and duration. Hajj is longer and far more involved than umrah.

Umrah requires that pilgrims consecrate and cleanse themselves beforehand and circle the Kaaba, a cubic structure draped in black at the center of the Great Mosque of Mecca, seven times in a counterclockwise direction.

In doing so, they join in a long line of pilgrims to Mecca who have circled the Kaaba. Some may also kiss, touch or approach the black stone embedded in the Kaaba as a sign of their respect and devotion.

The Kaaba is central to Muslims because of its role in the history of prophets like Ibrahim and Muhammad and its symbolism of their worship of the one God. Across the world, Muslims pray in its direction.

Afterwards, pilgrims perform prayers and walk about 100 meters between two hills known as Safa and Marwah. This recalls a significant event recorded in the Quran.

After Ismail was born, God instructed Ibrahim to leave his newborn son and his mother, Hajar, out in the desert, and he complied. But when baby Ismail cried out with thirst, Hajar ran between the two hills looking for water, until finally she turned to God for help.

God rewarded Hajar for her patience. He sent his angel Jibreel to reveal a spring, which today is known as the Zamzam well.

Pilgrims go on to drink from the well, marking the moment when God provided water to a thirsty Ismail.

Umrah can be completed in a matter of hours. Hajj, however, takes five to six days. It also includes additional rituals outside of Mecca.

This is not the first time diseases have impacted pilgrimages. Cholera outbreaks in 1821 and 1865 claimed thousands of lives during hajj. In 2012 and 2013, Saudi authorities encouraged the ill and the elderly not to undertake the pilgrimage amid concerns over Middle East Respiratory Syndrome, or MERS.

While the recent decision halting umrah will disappoint Muslims looking to perform the pilgrimage, they might refer to a hadith that provides guidance about traveling during a time of an epidemic.

“If you hear of an outbreak of plague in a land, do not enter it; but if the plague breaks out in a place while you are in it, do not leave that place.”