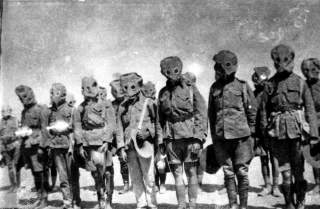 As the spring of 1918 opened, the end of the largest war that humanity had yet undertaken appeared to be in sight. The collapse of the Russian Empire resulted in a brutal sort of “peace” in the East, allowing the transfer of German soldiers to the Western Front. The senior commanders of the Reichswehr knew that they needed to win the war rapidly, as famine was taking hold in the homeland and ever more Americans were arriving in France. Either the Germans would strike a decisive blow in the West, or the Allies would overwhelm them. Either way, an end to the carnage was foreseeable.

What no one appreciated was that another enemy, far more lethal than either the Allies or the Central Powers, was lurking. The Spanish Flu first struck in early spring, just as the Ludendorff Offensive was getting underway. It rested during the summer but in the fall attacked again with dreadful effect. By the end, the Flu would kill five times as many people as all of the guns, bombs, and torpedoes of all the combatants in World War I.

The Impact in Europe

The impact of the Spanish Influenza in Europe is more difficult to isolate than its impact in the United States. Wartime censorship often prevented full statistics from reaching the news, thus making it more difficult for historians to assess the course of the disease. In some countries (Germany especially), the flu mingled with general hunger caused by the British blockade. Much of Eastern Europe suffered in the same situation.

The influenza struck in three waves, which coincided with three phases of the war. The first, milder wave came in the spring of 1918 as Germany ramped up what it hoped would be a war-winning offensive against the Western Allies. The second, far more lethal wave struck in fall, as German forces fell back and the Allied armies advanced across France. The last hit in 1919, during the revolutionary chaos that swept the defeated powers.

By spring 1918, Germany had won the war in the East and believed that it potentially had a decisive advantage in the West. Consequently, the Germans prepared a massive offensive named after its primary architect, Erich Ludendorff, designed to break Allied lines and bring about an end to the war. Launched on March 21, the offensive tore huge holes in Allied lines and threw the Allies back at a rate unseen since 1914. Eventually, however, the offensive flagged as the Germans ran low on troops, and as the Allies poured personnel, tanks, aircraft, and heavy artillery into the front. By mid-July, the initiative had passed to the Allies. The flu undoubtedly sapped the strength of the Ludendorff Offensive; Ludendorff himself reported that daily illness reports left him worried for the survival of the army. However, because of its relatively mild impact in the first wave, and also because the French, British, and U.S, armies were also seriously afflicted by the disease, it’s likely wrong to suggest that the Flu defeated the German offensive.

The second wave was different. As the Allies launched what became known as the Hundred Days Offensive, the virulent recurrence of the influenza struck the Germans hard, in large part because of a drop in morale in the wake of the failure of the Ludendorff Offensive, but also because of the increasingly dire supply situation that left German soldiers hungry and vulnerable. Fourteen thousand German soldiers reportedly died of the flu, although wartime censorship may mean that the figure is much higher. Worse for the Germans, the flu left much of the army incapable of fighting during the desperate days of autumn 1918. Soldiers from Austria-Hungary suffered at similar rates.

The British Expeditionary Force identified the first influenza cases in April 1918. Canadian soldiers, along with the Americans, helped bring the virus to the British Army. The first wave of the epidemic was operationally devastating to the French, even if it caused relatively few fatalities. By May, the French were evacuating as many as two thousand soldiers per day from the front because of influenza. This left an obvious toll on the French logistical system, although the French undoubtedly benefited from fighting on their own territory.

At least 7,500 members of the BEF died of influenza in 1918. Overall, modern estimates suggest that the flu killed some 230,000 Britons altogether. Overall, some 30,000 French soldiers died as a result of the disease, along with perhaps 250,000 civilians. As was the case with the Americans, the weakness inflicted by the Flu undoubtedly reduced the lethality of the British and French Army offensives of late 1918 but it did not fatally undermine them.

Russia and the East

In large part because of the chaos that afflicted Eastern Europe at the end of the war and during the Russian Revolution, we have little solid data regarding the impact of the Flu. Some estimates suggest a very low rate of infection, possibly because of relatively light population density. However, given that none of Poland, the Soviet Union, Ukraine, or any of the other successor states to the Russian Empire had the ability to collect widespread data at the Flu's height, the real impact of the flu on the military situation seems largely unknowable. The devastation inflicted by the Russian Revolution and the Civil War would certainly have undermined any existing public health systems across the region.

We do know that Poland suffered between 200,000 and 300,000 dead, by the best estimates available. Deaths peaked in the winter of 1919/1920, which coincided with the Polish-Soviet War. The tide of the war turned against Poland in early 1920, although it’s difficult to conclude with any confidence that this resulted from the Flu, rather than from other operational and strategic factors.

It is difficult to assert conclusively that the Spanish Flu had a direct effect on the end of the war; the flu struck all combatants simultaneously, weakening their armies while also attacking the homelands. But on balance weakness matched weakness, and the primary causes of the German defeat were military, rather than viral.