Coronavirus Mayhem: You Won't Be On a Beach Anytime Soon 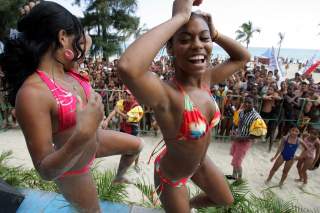 This ban will greatly affect events across the country – especially weddings.

But where did the 100 figure come from, and if you’re in close proximity to people, does it matter if there’s a roof over your head?

Why being indoors matters

We have only known about COVID-19 since January, and so the evidence informing the government’s decision is likely to have come from what we know about how mass gatherings affect the transmissibility of other viruses, such as influenza.

Interestingly, even with the flu, there isn’t much good evidence about how mass gatherings influence disease transmission, though it is well accepted that they do.

What we do know is that people tend to be in closer contact when indoors. This might not always be the case, but it’s usually a safe assumption.

Like other respiratory viruses, COVID-19 can be spread by infected persons by droplets expelled from the nose and mouth when they cough or sneeze. It is known that a single cough can produce up to 3,000 droplets. These droplets, which contain infectious agents, can then travel in the air and land on other people. If the droplets enter their eyes, nose or mouth, they can become ill.

A study which has not been published as yet (which one can forgive at this time given how quickly things are moving) suggests SARS-CoV-2 (the virus that causes COVID-19) can survive in droplets for up to three hours after being coughed into the air.

If you’re outside, in addition to usually having more spacing between people, the air is more disturbed, and any droplets produced are more likely to be diluted.

So the upshot is that there are probably a number of factors that influence the potential for a virus to spread among people in a gathering, including: how crowded it is, how long the event goes for, and whether it’s held indoors or outdoors.

How well individuals who attend events adhere to personal hygiene and social distancing is also going to be very important.

As for the numbers the government has come up with, there’s nothing in the scientific literature to say viruses cannot spread among fewer than 100 people indoors, or fewer than 500 people outdoors, but presumably the line had to be drawn somewhere.

Clearly the more people in a gathering increases the numbers of people potentially being infected if a case was among the group, and the more difficult it is to do contact tracing in the instance where transmission may have occurred. For lots of reasons we should be staying small when it comes to gatherings at this time.

How do I know if I should cancel my event?

It’s not only about the number of attendees, there are a few other things to consider if you have an upcoming event planned, including the health and demographics of those in attendance. We’ve made this flow chart to help you make a decision.