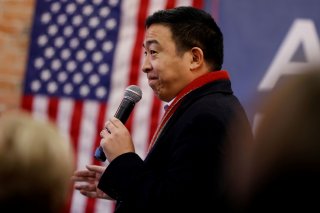 The idea of giving all Americans a universal basic income remains a policy answer in search of an actual policy problem. And the ongoing COVID-19 crisis doesn’t change that. Sure, there’s currently good reason for Washington to consider cutting checks to help vulnerable households. Whether the issue is lost jobs or reduced wages and hours, people still have bills to pay. It makes sense for the federal government to help support those distressed households. Maybe a $1,000 as soon as next month. And maybe in May, as well.

Such talk naturally reminds people — well, UBI activists, at least — of former Democratic presidential candidate Andrew Yang and his Big Think Idea: a monthly $1,000 basic income for all. Perhaps the virus will be the unexpected catalyst to turn a far-out policy idea into reality, proponents have been suggesting. And count Yang among them. As he recently told The Washington Post: ‘“Certainly I would never hope that UBI gets adopted because of this terrible virus. But I will say it’s somewhat surreal to suspend my presidential campaign in February and see it potentially implemented in March.”

Yang originally pushed a UBI as a solution to help mass unemployment due to robots taking all the jobs. That, even though there’s been little evidence that robots are taking all the jobs. Turns out that what really might take all the jobs is the pandemic. Or, to be more specific, the government response to the pandemic. Shutting down consumer-facing businesses and telling people to stay home means significantly shutting down the economy. Such “mitigation” measures are why we see dramatic Wall Street forecasts of second-quarter real GDP declines of 10 percent or more.

And while some Wall Street forecasts show a sharp recovery in the second half of 2020, there’s considerable uncertainty around those relatively optimistic scenarios. For instance: Barclays ponders a “severe” scenario where every quarter is negative. So maybe $1,000 checks month after month.

Of course, it would be better to prevent such an extended downturn. Checks to individuals won’t stop the disintegration of American business, especially smaller firms. And that’s happening now.

To ready the American economy for an energetic, post-virus awakening, government must supply direct financial aid to keep businesses whole and their workers on payroll. AEI’s Stan Veuger and GWU economist Steven Hamilton recently wrote that “with a temporary financial boost by government, these businesses could float through the crisis and, once it lifts, spin back up quickly—scaling up hours for their workers, purchases from their suppliers and sales to their customers.”

Veuger and Hamilton noted that in Australia, for instance, “every Australian small and medium business will receive a check worth between $1,300 and $15,900.” But those aren’t forever checks and neither would financial assistance to American firms. Just a bit of temporary help during what is looking like a once-in-a-century pandemic. And those checks to people should be temporary, too.

This article by James Pethokoukis first appeared in 2020  on the AEI Ideas blog.