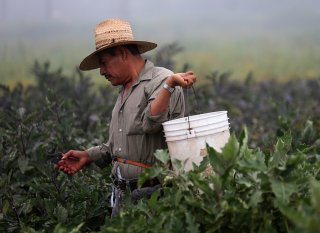 Like the Lernaean Hydra of Greek mythology, the coronavirus pandemic is a monster with many heads. From a viral outbreak sprang an economic crisis, which, in turn, has brought forth food shortages. Containment measures in the United States inadvertently resulted in other public health problems, such as delays for breast tumor treatment and a rise in mental health issues. Now the White House might have made a toothy addition to the corpus in the form of a national security concern.

After President Donald Trump announced he would suspend immigration to the United States to protect the jobs and wages of myriad workers affected by the pandemic, a deluge of business backlash poured on.

When Trump finally signed his proclamation on immigration, it applied primarily to individuals seeking a permanent residency while exempting several categories of foreign workers and employers. In other words, the ban hurts those who are not coming to the United States for solely economic reasons, while benefiting those who are and those who employ them. It also undid the Department of State's pause on all routine immigrant and nonimmigrant visa services, issued on March 20.

In a scathing letter, Dan Stein, President of the Federation for American Immigration Reform, noted that less than 10 percent of immigrants are affected. Stein added that "it completely ignores what is arguably the largest component of foreign-born impact on the welfare of American workers: out of control guest worker programs including H-1B, H-2A, and H-2B."

By exempting seasonal foreign farmworker visas, the president turned a blind eye to one of the largest sources of immigration. Moreover, these workers often live in close quarters in employer-supplied housing and commute together in buses—conditions that seem perfect for spreading a pathogen.

Worst of all, the proclamation also has a special carve-out for the deeply flawed EB-5 visa program.

Created by Congress in 1990, the employment-based fifth preference visa, or EB-5 Immigrant Investor Program, allows wealthy foreign investors to purchase a path to citizenship for as little as $900,000. While the program was well-intended, it rapidly degenerated into a cash-for-green cards racket. Money that is supposed to go to businesses and development projects in struggling communities often ends up paying for the scaffolding on luxurious suites accessible only to the jet set.

In 2013, the Department of Homeland Security launched an investigation into the EB-5 program. The DHS determined that the United States Citizenship and Immigration Services, which oversees the program, "is limited in its ability to prevent fraud or national security threats that could harm the United States; and it cannot demonstrate that the program is improving the U.S. economy and creating jobs for U.S. citizens as intended by Congress." Canada canceled its equivalent of the EB-5 visa in 2014 for basically the same reasons. We kept ours, however, and the problems with it have only grown.

The Government Accountability Office issued a report in 2015, finding the investor program vulnerable to fraud, abundant with counterfeit documentation, and with "no reliable method to verify the source of the funds of petitioners."

A bipartisan, bicameral investigation headed by Senate Judiciary Committee Chairman Chuck Grassley in 2017 found investors swindled out of $50 million that should have gone to development projects. While those projects never materialized, "more than 100 Chinese investors, including several Chinese fugitives, obtained visas."

All things considered, why would the administration exempt the EB-5 visa program? It might have something to do with who enjoys a seat with Trump's Great American Economic Revival Industry Groups.

Witkoff Group used the EB-5 program to raise money for various projects, including an $80,000,000, 28-story, 255,000 square foot commercial building with a hotel and residential condominium units in Manhattan's Lower East Side.

Vornado was involved in a development project that would have been partially funded by EB-5 cash connected to Jared Kushner, the president's son-in-law and a senior advisor. The deal involved Chinese investors and was a point of interest for Special Counsel Robert Mueller's investigators. It ultimately fell apart in the face of mounting national security concerns.

But now the Middle Kingdom has had its day in the sun with the president's immigration edict, as more than 80 percent of EB-5 visas go to Chinese investors. Other exemptions, moreover, favor China: the E-2 and L-1 visas.

The E-2 is a nonimmigrant visa that allows foreign nationals of a country with which the U.S. has a treaty of commerce and navigation to be admitted to land of the free by investing a significant amount of capital in a U.S. business. China does not maintain such a treaty with the United States—but there is a backdoor: Grenada. Unlike China, the little Caribbean island is a treaty country, making it a springboard to the United States.

Chinese investors can obtain a second passport from Grenada in exchange for investment there, then use their second citizenship in that treaty country to apply for an E-2 visa. This scheme resulted in a 72 percent increase between 2014 and 2017 for E-2 visas issued in Chinese embassies and consulates, according to Visa Franchise, a leading advisor for identifying and analyzing U.S. businesses. The exemption for the E-2 holds open a backdoor for leapfrogging into the United States.

Grenada has developed a lucrative industry based on the E-2; citizenship is just a $100,000 investment away. It can actually be cheaper to come to the United States with the E-2 rather than with the EB-5 because the total cost of obtaining the E-2 visa along with the Grenadian passport is generally between $300,000 and $500,000.

The L-1 visa "enables a foreign company which does not yet have an affiliated U.S. office to send an executive or manager to the United States with the purpose of establishing one." Chinese investors increasingly use the L-1A nonimmigrant visa to enter the United States. Forbes deems it is the best option for Chinese investors looking to come to America—even better than the EB-5. In China, however, there is no such thing as a private company or private investor.

The country that spawned the coronavirus that triggered a health crisis turned employment crisis, that exacerbated Western panic by suppressing information about the germ, then threatened through state-run media to plunge America into "the mighty sea of coronavirus," appears the biggest winner of the immigration proclamation.

Of all the exemptions President Trump made, few are so venomous as the EB-5 species and its cousins, the L-1 and E-2. If the president intends to make good on his promise to give the American people the help they so desperately need, he must bring his house to order. He must not allow avarice to add a national security threat to the growing litany of challenges we face.