The Coronavirus Panic Could Destroy the U.S. Economy. That Doesn't Need to Happen. 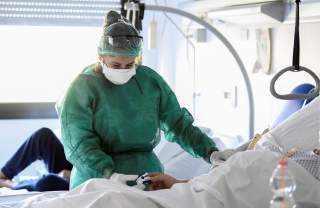 Politicians in both parties are reacting hysterically to Wuhan coronavirus and needlessly destroying America’s economy. The harm they are doing to Americans’ health and wealth will be far worse than the virus.

From coast to coast, large portions of Americans are being discouraged or prevented from leaving home, going to restaurants, or traveling. These overkill restrictions apply not merely to the elderly people with other health problems who are actually at risk from this new disease, but to healthy adults and kids whose odds of dying are infinitesimal.

So excessive is the fear and hysteria that college students who are taking spring vacations are being shamed by politicians, reporters, and social media schoolmarms for not heeding the calls to engage in “social distancing.”

But the kids may know best.

As of early Thursday, the virus has produced about 10,000 cases in the United States and led to only 200 deaths. The probability that mortality from the disease will exceed the average 30,000 deaths from the flu in any given American winter is low.

Furthermore, nations closest to the outbreak’s origin in China are doing just fine. In Taiwan, Japan, Singapore, Hong Kong, and even previously hard-hit South Korea, the worst is over. New infections are far past their peak, and deaths have slowed to a trickle.

Despite extensive ties to China, Taiwan has had just 100 cases and 1 death. Similarly, Singapore reports just over 300 cases and no deaths. Japan is down to a few deaths per day and will host the Summer Olympics in July.

Furthermore, countries in the southern hemisphere, where it is late summer, and those close to the equator have death rates that are low or nonexistent, implying this respiratory illness, like so many others, will die out with warmer weather.

But what of Iran and Italy, where the disease’s reach and mortality could foretell hundreds of thousands of deaths in America?

Well, the public in Italy doesn’t merely accept corrupt and incompetent government and public institutions: it insists on them. Italy also has an old population and a large number of Chinese visitors and workers. Combined with Rome’s early unwillingness to stop travel from China, conditions were always ripe for disaster.

As for Iran, public health has been an afterthought for a regime whose primary pursuits since 1979 have been the exercise and export of radical Islamism and terrorism. Money that could have trained doctors and built hospitals instead produced tyranny and arsenals aimed at Israel from Gaza and Lebanon. The clerics in Qom, the pilgrimage city where the outbreak began, refused even modest sanitary precautions.

When considering case studies, the free nations of East Asia apply to America; Iran and Italy do not.

Of course, prudent measures to limit the outbreak’s reach make sense, but none of the successes in East Asia came from emulating the mass shutdown tactics seen in China—and more recently in the United States.

Put simply, politicians, media, and public health bureaucrats drunk on their one taste of power here in America have gone nuts.

Take Colorado for example. The state has only 160 cases and two deaths. The Democrat governor, Jared Polis, ordered all restaurants, bars, theaters, gyms, casinos, coffee shops, ski resorts, and public and private schools closed. He and fellow state Democrats have no plan to compensate the waiters, teachers, baristas, and retail workers who have been deprived of work, much less business owners now facing bankruptcy.

Both parties in Washington are just as bad. On Wednesday, President Trump signed a second relief package that puts costly new burdens on small businesses already facing crisis. Only forty congressmen and eight senators voted against the bill—all Republicans.

The business-killing deal was led by Treasury Secretary Steven Mnuchin, a hedge fund whiz who seems ignorant of how small and medium-sized business actually survive, pay bills, and employ people. Indeed, Mnuchin and his fellow Wall Street ally in the White House, Larry Kudlow, embody Trump’s biggest problem now: the crisis has moved from a significant medical challenge to an extreme business one. Putting the surgeon general on TV isn’t going to help and neither apparently will investment bankers who don’t understand the real economy outside of high finance. Furthermore, Mnuchin’s method of negotiating with House Speaker Nancy Pelosi is to give her everything she wants.

It may be too late to stop economic disaster. Thanks to hysteria, airlines face circumstances similar to those just after 9/11. The rest of the travel and tourism industry is idled. Factories are being shut with workers moved to unemployment.

Trump should try to mitigate what could be a coming quarter of economic contraction worse the bottom of the 2008 financial crisis—and not just through an anticipated third relief package moving through Congress that will cost $1 trillion.

Trump and fellow Republicans ought to focus now on calming the public and attacking media hysteria. Especially as his “Fifteen Days to Slow the Spread” scheme comes to an end, he should urge Americans to go back to work and resume normal activity if they are not in high-risk groups or located in outbreak clusters.  It would be a prudent balance of medical risk and economic necessity, plus his presidency probably depends on it.