Coronavirus Is Proving To Be a Killer in Nursing Homes 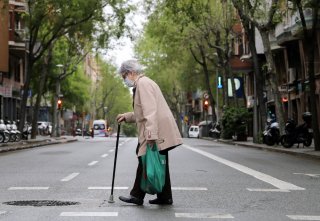 While everyone is equally capable of contracting the coronavirus, complications related to the disease are hitting a very specific subgroup. For instance, in New York City—which has become ground zero for the virus in the United States—roughly 20% of those infected require hospitalization. 75% of that subgroup, however, is over the age of 45. And excluding a literal handful of outliers, all of New York City’s deaths have been people over 45 as well.

Coronavirus is a disease that disproportionately impacts the elderly. And that is creating a disaster area in the nation’s nursing homes. In the words of New York Governor Andrew Cuomo, “Coronavirus in a nursing home can be like fire through dry grass.”

Out of New York state’s over 1,900 deaths, hundreds of them have occurred in nursing homes. At one facility, located in Manhattan, more than two hundred of their 1,700 residents have tested positive for coronavirus. The situation is deteriorating so much that the head of the company that runs the complex has taken the drastic action of suggesting families pick up their loved ones and bring them home.

Prior to New York becoming the epicenter, that title was held by Washington state until mid-March. That’s because early on in the epidemic, there was an outbreak of coronavirus at a nursing home in a Seattle suburb. Dozens of nursing home workers were diagnosed as asymptomatic carriers, and dozens of the elderly residents died. This early death toll spiked prompted immediate action by the state and local government, and now, two weeks later, Washington state has declined to have the tenth largest outbreak in the country. The state has suffered 226 deaths.

Meanwhile, California has climbed to have the third-largest infected population, over 8,500. And once again, nursing homes have been one of the hardest-hit locations. At just one nursing home in San Bernardino County, more than fifty residents have been diagnosed positive, and the facility has already had two deaths.

Even Maryland, which is eighteen in the country for coronavirus cases, is having its situation worsened by the conditions at nursing homes. At one location in Mount Airy, more than seventy-five residents have tested positive for the virus. According to the county health officer, the outbreak occurred in the span of a day. The death toll at the facility has risen to five.

Nursing homes nationwide have instituted a strict no visitors’ policy. Enforced to prevent their at-risk residents from becoming infected, this action has taken an emotional toll as a family is unable to see their loved ones and the elderly, not always aware of the situation, do not understand why they no longer see anyone. Most of the nursing home residents who have passed away have done so without family by their side.