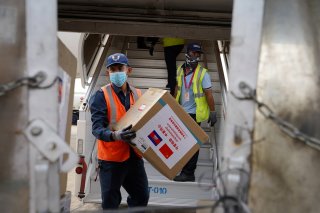 One cloudy September morning in 2008, we were sitting in a conference room at a research institute in Beijing when, one after another, our hosts’ cell phones began vibrating on the table. The American investment bank Lehman Brothers had collapsed. The “Lehman Shock,” as it was called in parts of Asia, sparked what would be known as the Great Recession in the West. As our Chinese hosts looked up from their phones and back at our American delegation, their eyes filled with a combination of concern, pity… and, we thought, a glint of opportunity.

For many Chinese leaders, among them then-Vice President Xi Jinping, that 2008 moment was a clear sign that the time had come for their country to shift from “hiding and biding” and “never taking the lead,” to a more ambitious approach to international affairs. Simply put, it was time for China to step out.

An ethical leader shows altruism and provides global public goods, we told our hosts, and called upon them to adopt a more ethical approach to securing Chinese interests abroad. After all, a great power need not be seen as threatening if it uses its strength to look after the common good and promote shared security and prosperity.

Looking back, it is clear to many that 2008-2009 marked a significant change in geopolitics. It also began a dramatic shift in China’s tactics; when the provision of public goods became a prominent part of Beijing’s claim to responsible global leadership. Xi Jinping’s ascent to power in 2011-12 was a second inflection point, one that, according to Wang Jisi of Peking University and Shi Yinhong of Renmin University, marked a dramatic expansion in China’s strategic provision of public goods. Since then China has launched major proposals – like the Belt and Road Initiative and the Asian Infrastructure Investment Bank – that provide what it sees as the most critical public good of all: development capital.

Indeed, the last decade has provided fertile soil for Beijing’s ambitions to take root. In many countries, including the United States, the vast inequality that globalization has produced has led to widespread disenchantment and a backlash against the existing political and economic establishment. And while the United States responded by adopting a more transactional, zero-sum approach to its foreign relations, China seized the day by expanding its public goods provision. Not surprisingly, at a time of growing fear and insecurity, officials from many countries, particularly developing ones, applauded its emergence.

But then came the coronavirus, which has called China’s global leadership and domestic governance into question. The virus’s arrival contributed to the spread of intense anti-Chinese sentiment precipitating a full-blown image crisis for Beijing. This is particularly true in Africa and the Middle East, where the pandemic’s origins have perpetuated a counter-narrative to the official version of China as a development model and emerging public goods provider.

Of course, the coronavirus is not the only reason for the rapid erosion of China’s image. It is simply the latest one. Anti-Chinese sentiment had been on the rise in Africa and the Middle East even before the outbreak of the pandemic, stoked by a plateauing of trade and growing trade deficits, as well as China’s repressive domestic practices, including the imprisonment of over one million Uighur Muslims. With all this ready kindling, the virus ignited a firestorm of criticism, which has now made its way into more mainstream outlets.

Beijing’s swift response – doubling down on the provision and "propagandization" of its global public goods – marks a third inflection point in China’s quest for global leadership.

Rather than scour the world in search of medical equipment to import, as U.S. officials are now doing, China has been providing masks, ventilators, and other equipment to countries in need via its “Health Silk Road,” then bragging about it online and rewriting the narrative, using propaganda and information control and its state-owned media. By doing so, China is working to flip the script on the virus narrative and is now portraying itself as a legitimate partner and leader of the global response to the pandemic.

Whether this strategy works is, at least in part, up to Washington. The Trump administration has correctly sought to highlight Beijing’s duplicity and its efforts to skirt responsibility for the global spread of the disease. But condemning China isn’t enough, and calling COVID19 the “Chinese Virus” is misguided and counterproductive.

The coronavirus pandemic has helped to loosen China’s grip on international opinion, and – for what may be the first time in years – led foreign nations to question its claims to global leadership. For instance, Spain and the Czech Republic are reporting that China sent them faulty virus test kits. This means the United States now has a rare and fleeting opportunity to boost its international image and restore faith in the U.S.-led world order. Doing so, however, will take more than finger pointing. For the United States to regain its position as a dependable friend for nations in need and a source of support for those aspiring to democracy and development will require a deep and bipartisan recommitment to providing global public goods, but, unfortunately, such a commitment does not seem to be in the offing.

Eisenman is associate professor in the Keough School of Global Affairs at the University of Notre Dame, and Senior Fellow for China Studies at the American Foreign Policy Council. Stewart is a senior fellow at Carnegie Council for Ethics in International Affairs in New York.