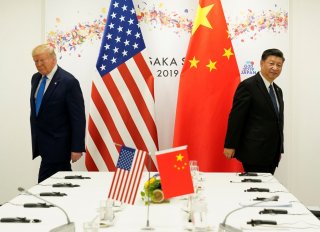 The United States has over 432,000 confirmed COVID-19 infections as of this article’s writing, more than any other country and nearly three times as many as Spain, which has the second-highest figure. Nearly 17 million Americans have filed jobless claims over the past three weeks, putting the country on track for an unemployment rate of 15 percent.

How might such realities—which are likely to grow more severe in the coming months—affect U.S. policy towards China? The United States had been growing progressively more disillusioned with China’s trajectory long before the first case of the deadly virus was recorded, not only because Beijing has been doubling down on authoritarian rule, but also because it has been pursuing an increasingly coercive foreign policy. “By the end of 2019,” observed the New Yorker’s Evan Osnos at the beginning of this year, “the Washington establishment had all but abandoned engagement with China.” Intuition suggests that the coronavirus pandemic would only entrench that posture. The virus originated in Hubei province, after all, and the Chinese government initially concealed the extent of the outbreak and suppressed doctors and journalists who tried to sound the alarm. Additionally, Chinese officials and outlets have circulated disinformation that aims to distract from their leadership’s own mismanagement.

But, the pandemic could actually complicate America’s efforts to formulate a coherent policy towards China, because it has vividly and painfully illustrated the challenges involved in recalibrating complex interdependence. On the one hand, by highlighting the extent to which the United States depends on China for medical supplies, it will likely increase the intensity and scope of the former’s efforts to decouple the two countries’ economies. On the other hand, by demonstrating the consequences that can result when strategic distrust precludes even the most self-evidently necessary cooperation, it will likely increase pressure on the United States to ensure that continued economic disengagement does not lead to a wholesale diplomatic rupture.

According to the Peterson Institute for International Economics, Beijing accounted for 48 percent of Washington’s imports of personal protective equipment (PPE) in 2018. The U.S. Commerce Department notes, moreover, that it also accounted for the lion’s share of Washington’s imports of ibuprofen (95 percent), hydrocortisone (91 percent), and acetaminophen (70 percent). Beijing is aware of this and an article in Xinhua in early March warned that “the United States would sink into the hell of a novel coronavirus epidemic” were China to ban the export of such drugs.

Proponents of such measures argue not only that the United States needs to reduce its dependence on China for medical products, but also, more broadly, that it needs to restore its indigenous manufacturing base. Despite having the world’s largest economy by a margin of over $7 trillion, the United States began experiencing shortages of PPE almost immediately after the virus breached its borders. The Trump administration has invoked the Defense Production Act, a Korean War-era national security mobilization law, to facilitate private-sector production of ventilators, and is enlisting manufacturers from China, Honduras, India, Malaysia, Mexico, Taiwan, Thailand, and Vietnam to secure PPE supplies. Supporters of the administration’s foreign policy argue that the United States finds itself in this situation because it effectively “exported” its manufacturing base to China in the 2000s.

The Trump administration has taken many steps to undercut trade and technological interdependence between the two countries, including imposing steep tariffs on Chinese exports, targeting major Chinese telecommunications companies, and restricting the export of emerging technologies to China. While some observers had speculated that the “phase one” trade deal between Washington and Beijing might yield a commercial truce, the pandemic may compel advocates of the aforementioned measures to argue that the Trump administration needs to act even more aggressively to reduce China’s role in global supply chains and in the U.S. economy. As the Asia Society’s Orville Schell observes in the new issue of Foreign Policy, the coronavirus has furnished for advocates of economic decoupling “exactly the kind of cosmic sanction they needed to put a final stake through the heart of engagement—and perhaps even the whole notion of globalization as a positive force.”

But it has also reaffirmed how indispensable a minimally-functional relationship between the world’s superpower and its principal competitor is to the provisioning of global public goods. As horrifying as the pandemic’s consequences for global health have already been, they are likely to grow incalculably worse as the coronavirus courses through impoverished, densely-populated swathes of humanity in sub-Saharan Africa and South Asia. And the economic devastation is poised to grow in parallel, with a growing number of economists contending that the world is headed for a downturn of even greater magnitude than the Great Depression. It is difficult to imagine how any effort to blunt the pandemic will succeed without a modicum of cooperation between the United States and China—which account for roughly 40 percent of gross world product—and collectively possess unrivaled biomedical expertise.

In April 2009, President Barack Obama and his counterpart Hu Jintao established the Strategic and Economic Dialogue, upgrading the Strategic Economic Dialogue that the Bush administration had established in September 2006. Secretary of State Hillary Clinton, who chaired the strategic track with Chinese State Councilor Dai Bingguo, and Secretary of the Treasury Timothy Geithner, who chaired the economic track with Chinese Vice Premier Wang Qishan, argued that “few global problems can be solved by the U.S. or China alone. And few can be solved without the U.S. and China together.” Coordination between Washington and Beijing was essential to ensuring that the global financial crisis of 2008-09 did not devolve into a 1930s-scale depression. In addition, the United States and China collaborated to fight SARS, H1N1, and Ebola, establishing a robust foundation of healthcare cooperation across a fifteen-year period from the early years of the Bush administration through the end of the Obama administration.

Unfortunately, though, that cooperation has largely disappeared in recent years—so much so, in fact, that a simultaneous health and economic emergency of global, rapidly expanding proportions has served not to punctuate their mutual hostility, but to amplify it. Rather than working together to identify the origins of the virus, sound an early alarm about its severity, and develop potential treatments, the United States and China have largely traded recriminations and attempted to frame each other as irresponsible stakeholders. One can only hope that the recent phone call between Presidents Donald Trump and Xi Jinping will induce the two countries to change course.

This crisis will eventually pass, but there will be others, and they, too, will require Washington and Beijing to subordinate strategic competition to humanity’s requirements. The pandemic has placed that imperative into the sharpest possible relief. Less clear is how it will shape U.S. policy towards China. While Washington will likely emerge with a desire to engage in more aggressive economic competition with China, it is equally likely to come away with a renewed appreciation for maintaining a cooperative baseline with its principal strategic challenger.